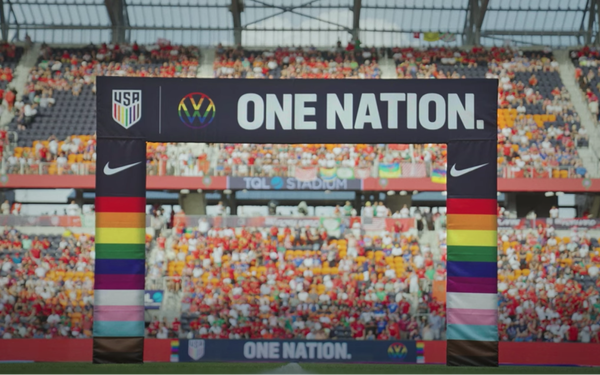 Volkswagen of America is teaming up with U.S. Soccer to support the “You Can Play” in time for LGBTQ+ Pride month, which is recognized in June.

“You Can Play,” which is celebrating its 10th anniversary,  is dedicated to ensuring equality, respect and safety for all athletes, coaches and fans no matter their sexual orientation, gender identity or expression.

The group partners with sports leagues and other organizations to evolve locker room and spectator culture, consult on inclusion policies, build stronger fan engagement and increase participation in sports among LGBTQ+ youth.

Zimmerman and You Can Play Project Co-Founder Glenn Witman share their thoughts on Pride Month and the importance of diversity, equity, inclusion and belonging (DEIB) in a Volkswagen video.

In addition to donating all proceeds from the auction to the You Can Play Project, Volkswagen has also promised to donate $5,000 to the organization. The auction is open through June 30.

“U.S. Soccer and VW both understand how vital inclusion in sport is to our community, especially young athletes struggling with their sexuality or gender identity,” Witman says in a release. “This partnership will amplify our message to a new generation of coaches, athletes, families and fans.”

The Men’s and Women’s National Teams are wearing special Pride jerseys with rainbow-colored numbers during their friendly matches this month.

The USMNT wore the rainbow numbers vs. Morocco on June 1 at TQL Stadium in Cincinnati and vs. Uruguay, presented by Allstate, on June 5 at Children’s Mercy Park in Kansas City, Kan.

The USWNT also wore the special jerseys during their friendlies against Colombia, presented by Allstate, on June 25 at Dick’s Sporting Goods Park in Commerce City, Colorado, and will wear them on June 28 at Rio Tinto Stadium in Sandy, Utah (10 p.m. ET; ESPN).