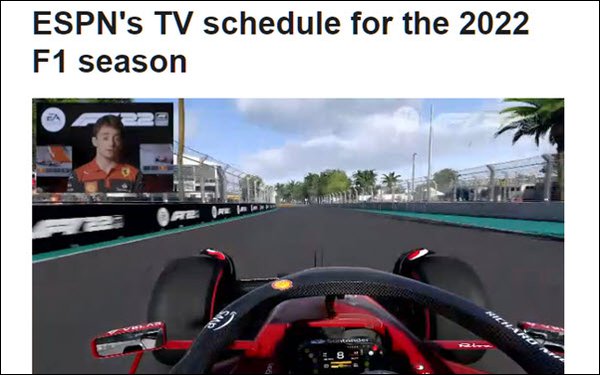 ESPN has prevailed over competitors including Amazon, Comcast and Netflix, to retain U.S. rights to broadcast and stream Formula 1 racing events.

The renewal deal is for three years, and ESPN has agreed to pay about $75 million to $90 million, according to Sports Business Journal sources.

ESPN currently pays about $5 million per year under a three-year deal signed in 2019.

The price was pushed up by greater competition for the sport, thanks to its greatly increased viewership in recent years.

In the past, other countries made up most of F1's global fan base, which Nielsen has projected will reach 1 billion by the end of this year -- with 77% under 35 years old.

But its popularity has skyrocketed in the U.S. in the U.S. since 2019, when Netflix launched its extremely popular docu-series, "Drive to Surive." Its U.S. viewership has risen to between 1 million and 1.5 million per race -- making the U.S. the sport's No. 1 market -- and U.S. races have expanded from just one, in Austin, Texas, to a second launched in Miami this year and a third planned for Las Vegas as of next year.

Comcast, which is a major F1 partner outside the U.S. through its Sky subsidiary, reportedly offered about the same monetary terms as ESPN, ad would have put several races on its Peacock streaming service in addition to airing races on NBC and USA Network.

Amazon reportedly put in a higher bid than ESPN (around $100 million), and would have sub-licensed linear broadcasting.

Netflix's offer is said to have fallen far short of ESPN's.

In addition, F1 had told contenders that it was not ready to move the sport entirely to streaming platforms, according to SBJ.