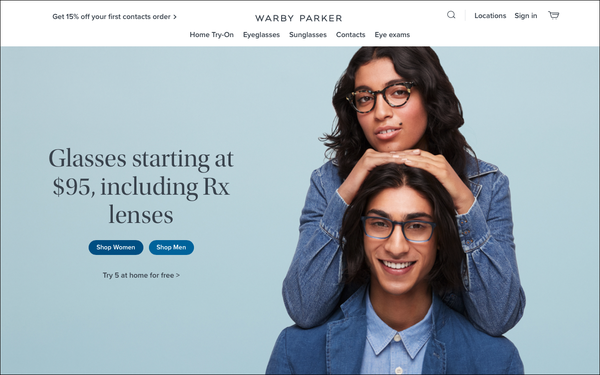 Handing a defeat to 1-800 Contacts, a federal judge has dismissed the retailer's trademark claims against Warby Parker over its search ads.

“1-800 Contacts has failed to plausibly plead a claim for relief as to its claims for trademark infringement and unfair competition under both federal and New York common law,” U.S. District Court Judge Kevin Castel in New York said in a ruling issued Monday.

1-800 Contacts also alleged that Warby Parker's landing page has a similar design to 1-800 Contacts' website -- including a light blue background and discount offer.

Warby Parker countered that the allegations, even if true, wouldn't show that the search ads were likely to confuse consumers.

Castel agreed with Warby Parker, writing: “The relevant consumer base, conducting internet searches in the year 2022, would likely be familiar with both the concept of paid search results and the significance of website address links."

He added that consumers are “sophisticated enough” to review search results and website content before making online purchases.

“In such circumstances, it is implausible that these reasonable online consumers would be confused as to whether the contact lenses sold on the Warby Parker site are related to 1-800 Contacts,” Castel wrote.

1-800 Contacts has a long history of suing other contact lens and eyewear companies over their search advertising campaigns. Between 2004 and 2013, the company sued or threatened to sue at least 14 competitors for alleged trademark infringement, based on allegations that the rivals used the term “1-800 Contacts” to trigger a search ad.

Thirteen of those companies settled with 1-800 Contacts by agreeing to restrict the use of its trademark in search advertising.

Lens.com, the only company to fight the lawsuit, largely prevailed.

1-800 Contacts' prior cases were at the center of an antitrust action by the Federal Trade Commission, which ruled several years ago that 1-800 Contacts acted anticompetitively by forging deals with rivals that limited their ability to advertise.

The 2nd Circuit Court of Appeals later reversed the FTC's ruling, writing that courts should defer to settlement agreements -- even if agreements about the use of trademarks could limit competition.