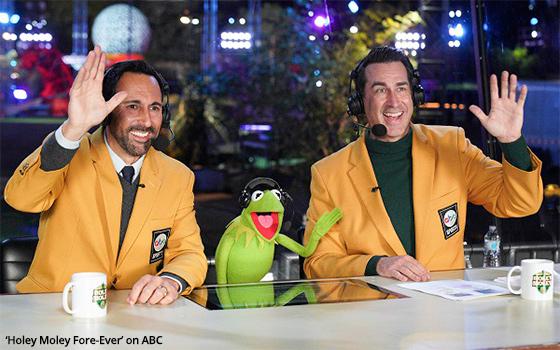 That's roughly a third of the 22 weekly hours that comprise network prime.

ABC's reliance on summer game shows sets it apart from its broadcast network competitors because none of the others have made a similar commitment to game shows on their summer lineups.

Produced by Jimmy Kimmel and Mark Burnett, “Generation Gap” is a quiz show that will pit pairs of seniors and juniors (i.e., younger people) in a test of each team's knowledge of pop culture from each other’s generations.

ABC describes “The Final Straw” as a “larger-than-life physical comedy game show [in which] four teams of colorful contestants face off to combat tremendous tipping towers.

“Each life-sized themed tower is chock full of various objects ranging from basketballs to small kitchen appliances as contestants try to successfully pull items from the stack without tipping it over in order to earn prizes. If the tower falls, the team is eliminated.”

“The Final Straw” comes from B17 Entertainment in association with Walt Disney Television.

On “Claim to Fame” -- from Kinetic Content in association with Walt Disney Television -- the contestants are 12 unknown relatives of celebrities.

These unknowns will be thrown together to live under the same roof, where they will be challenged to keep the identities of both themselves and their famous kin a secret as they vie for a grand prize of $100,000.

One of them, the Stephen Curry miniature golf game show “Holey Moley,” started its fourth season on Tuesday, May 3, at 8-10 Eastern, and winds up the season on July 12.

This season's edition, featuring a guest appearance by Kermit the Frog (above photo, center), is formally titled “Holey Moley: Fore-Ever!”

On Thursday nights, Kelly Ripa’s “Generation Gap” is hoping for a scheduling boost from “Press Your Luck,” hosted by Elizabeth Banks and starting its 4th season at 8-9 p.m. Eastern on the same night that “Generation Gap” will premiere in the 9-10 slot on Thursday, July 7.

Not on the summer ABC game show schedule: “To Tell the Truth,” hosted by Anthony Anderson and starring his mother, Doris Day Bowman. That show “graduated” from summer series to the regular season, and aired this past season from September 2021 to April 26, 2022, on Tuesdays at 10-11 p.m. Eastern.