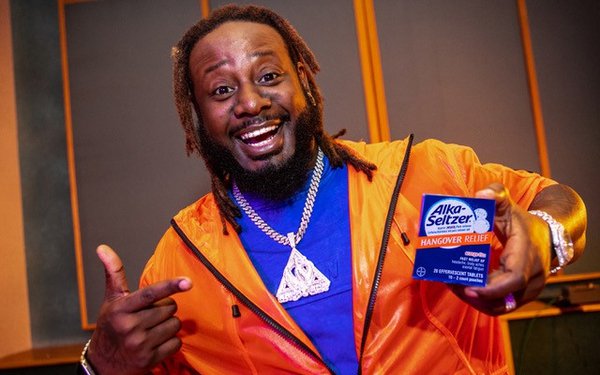 Hangover pain brings T-Pain to the rescue as the rapper brings back the classic “Plop Plop, Fizz Fizz, Oh What a Relief It Is” jingle in a video for Bayer’s brand-new Alka-Seltzer Hangover Relief.

T-Pain, whose hits have included “Buy U a Drink” and “Bartender,” would seem to know about hangovers. “My music is inspired by my love of a good drink,” he proclaimed, “and to say I’m excited that there’s a product that works to relieve my symptoms the next morning would be an understatement.”

The new product, which combines aspirin and more caffeine than a cup of coffee to create an effervescent orange-flavored drink, is clearly aimed at younger adults.

“We’re taking the fear out of that dreaded morning-after-a-few-drinks feeling so that people can go enjoy themselves knowing we’ve got their backs while providing an entertaining way to engage with a younger audience,” stated David Ball, general manager and vice president, Digestive Health, Bayer Consumer Health.

So far, marketing for Alka-Seltzer Hangover Relief consists of the revamped jingle, posted on AlkaSeltzer.com and Instagram, and a TikTok dance challenge, featuring a video where T-Pain passes a box of Hangover Relief out of frame and consumers can “receive” the product while showing off their dance moves.

Agencies involved with the product’s marketing, which will continue into 2023 and also include digital and radio components, are Energy BBDO, Linqia, Twelvenote and Coyne PR.

For those in this product’s target audience, Speedy was Alka-Seltzer’s puppet mascot. Sporting two Alka-Seltzer tablets (the suggested dose) -- one for his body and one for his hat -- he also had a distinctive high voice (Dick Beals, who also sang “I’d Love to Be An Oscar Meyer Weiner”).

Speedy sang “Plop Plop, Fizz Fizz” in the 1960s, following success with his 1950s hit, “Relief is Just a Swallow Away.” While actress Julianna Margulies has helped spread the story that her father – ad exec Paul Margulies – wrote the song (he did help create the original ad campaign, however), it was actually written by prolific jingle man Tom Dawes, also co-founder of the rock group The Cyrkle.