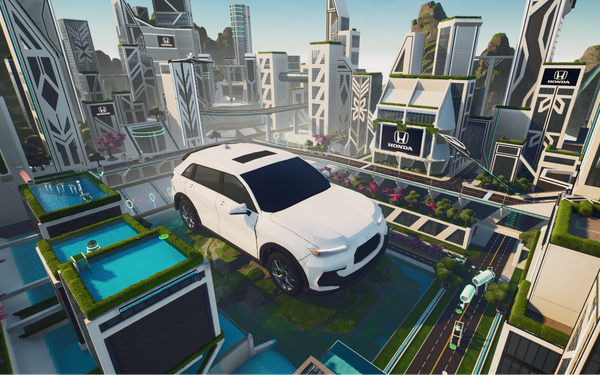 Honda is expanding its gaming ventures with the launch of the Hondaverse in Fortnite on Twitch on Friday.

The goal is to engage a broader audience of gamers to reach the next-gen car buyer, including fans of Fortnite and Twitch Creator SypherPK. The Fortnite game category on Twitch has over 80 million followers.

The Hondaverse is a fully immersive virtual world within Fortnite on Twitch that consists of custom Fortnite creative maps that become unique worlds where streamers, and eventually everyday gamers, can compete. It will feature multiple custom maps, launching on June 30 with the Honda Parkour world, built around the all-new 2023 Honda HR-V.

Stream #2 (July 13) will feature SypherPK’s journey as he attempts to conquer the Honda Parkour run as well as challenging his community with Honda Trivia. Hondaverse stream #3 (Aug. 1) is where Twitch creators and fans can play against SypherPK, for a chance to win prizes.

The Hondaverse will continue to expand beyond Honda Parkour through future new vehicle integrations, with each new world inspired by a specific Honda product. The initiative was orchestrated by AOR RPA.

Besides gaming and esports, the 2023 HR-V also will be integrated into Honda’s other youth marketing initiatives including music and sports/lifestyle partnerships.

The HR-V is an aspirational vehicle positioned as the gateway of the Honda lineup, says Jessika Laudermilk, senior manager, Honda marketing.

The brand launched TV spots for the HR-V earlier this month with a focus on young, diverse vehicle buyers.

“Unlock the Next Level,” from Orci, is aimed at Hispanic buyers. It features the 2023 HR-V in a gamified setting, and will run on Hispanic networks like Univision, Telemundo and UniMas.

Honda tapped Mike Carson, a multi-disciplinary film director, to help launch the HR-V through creative employing projection art, which led to "Twofold with Mike Carson." The initiative, led by Quantasy, is aimed at connecting with Black customers, while a second version of the spot will focus on reaching Asian American audiences.

The HR-V will also be featured in curated content sponsorships on Spotify and Vevo aimed at Asian, Hispanic and Black American audiences.