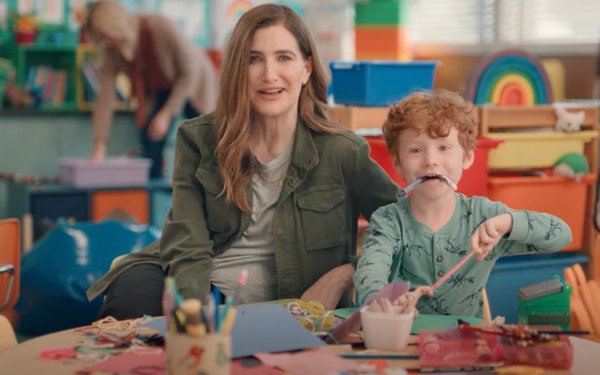 All the other parents may be rushing around to outfit their kids in the best back-to-school stuff, but Amazon is telling moms it’s OK to lower the bar.

“I know kids are expensive as *@#$,” says actress and comedian Kathryn Hahn, striding through corridors of lockers and noisy middle-schoolers. “So this year, I’m just going to spend less on them. You should try it!”

Amazon cooked up the new campaign inhouse, and it was shot by director Benji Weinstein. Ads are set to run on online video and digital, with a 30-second version slated for national TV throughout the back-to-school season.

“This year,” Hahn says, “no price is too low for your children.”

The spot is breaking just as Amazon finishes up its annual Prime Day hoopla, with early results indicating Amazon is smart to link its BTS ad to the kind of “Spend less” messages typically used by discounters.

Numerator, a data and tech company, shows a shift in buying patterns for Prime Day, with dishwasher detergent bumping new devices out of the most-purchased category.

Its analysis finds that 83% of consumers say inflation influenced their Prime Day choices.

About one third told Numerator they had held off on a purchase until Prime Day, and 27% had passed on a great deal, if it wasn’t a necessity. Some 13% decided against making a planned purchase.

And back-to-school was very much on consumers' minds, with 40% of BTS shoppers saying they’ve already checked off half their list by shopping on Prime Day.

The average household spend is roughly $117. About 16% are in a higher spending category, averaging more than $200.