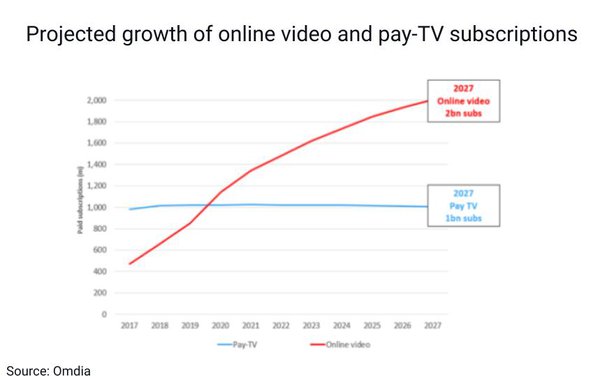 Despite slowing growth for leading subscription video-on-demand (SVOD) services in North America in particular, these subs grew by 17.7% to 1.34 billion on a global basis in 2021, according to a report from U.K.-based tech industry research and advisory group Omdia.

That would translate to 49% growth between year-end 2021 and year-end 2027 for paid VOD services alone.

Disney+, Paramount+, Peacock and others still have room for expansion in a number of “attractive” markets, and “the prospects for the alliance of HBO Max with Discovery+ also look exciting,” comments Adam Thomas, senior principal analyst in Omdia’s TV and online video team. “There are numerous reasons to be positive about online video’s prospects over the next few years.”

Still, with the SVOD business having been built on high content investment and low subscription prices, “a price-sensitive public has come to expect a lot of bang for their buck,” he cautions. “The content costs versus pricing balancing act is a tricky one to navigate, and we’ve already heard from Netflix that it expects to lose 2 million customers in this quarter. It is quite clear that constant growth for [paid] online video is by no means guaranteed.”

Meanwhile, thanks largely to the competition from SVOD and ad-supported video-on-demand (AVOD), global pay-TV subscriptions edged up just 0.6% in 2021, from 1.02 billion to 1.03 billion. 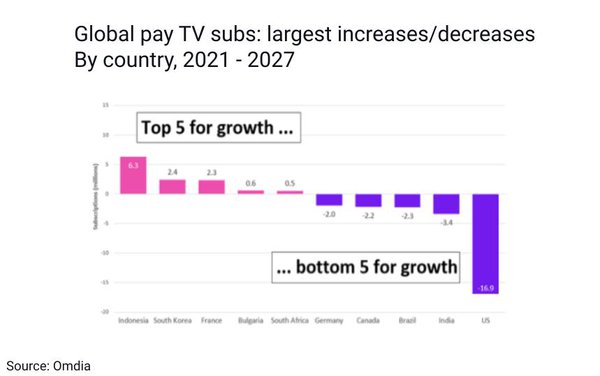 Of the 101 pay TV markets that Omdia tracks in most detail, 55 countries are still reporting subscription growth, 41 are seeing decline, and five are essentially static.

Omdia expects those variances to continue over the next five years, with countries like Indonesia continuing to post solid increases, while others -- most notably the U.S -- see ongoing decline.