Jan. 6 House TV Hearings Too Slick? The Story With Facts, Commentary, Ketchup Drips And All 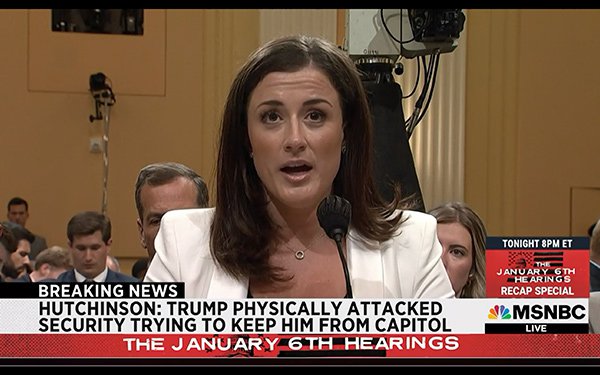 One new daytime news TV series seems to have earned a second season -- or some ongoing episodes. It comes on for an hour or two each day -- perhaps one or two times a week, with TV-like production values that are pretty easy to digest.

This is what the House Select Committee on the events around the January 6 insurrection looks like.

We are now a month and a half in. The hearings so far consist of a mix of in-person and videotaped testimony, onscreen video of the U.S. Capitol from the day itself, onscreen graphics of texts and/or phone call transcripts as well as questions and information from the House committee members.

The first hearing tallied 20 million total TV viewers among 12 broadcast and cable outlets -- not including Fox News, which apparently didn’t think it was newsworthy.

While subsequent hearings do not reach that level, some networks still see sharp spikes in higher viewing on particular days. For example, on July 12, MSNBC recorded three million daytime viewers -- much higher than its normal ratings level.

To be frank, the hearings seem like a courtroom drama. Yes, it is scripted in part. But there are real facts at play here. It’s all about selling a story, which is why TV viewers are responding.

You might ask whether there is another side of this "story." Perhaps it will reveal itself, and we’ll watch that.

Who structured these TV-friendly hearings this way? James Goldston, former president of ABC News, according to Axios, is an “unannounced advisor” for the hearings.

But not everyone likes it. House Republicans complained Goldston's association was in violation of House rules -- that a formal letter was required to House members, if, in fact, Goldston was formally hired.

Now reflect back on 2019, with the conclusions of a special counsel investigative report into Russian interferences into the 2016 Presidential election by former FBI director Robert Mueller. That report was 448 pages long.

While many analysts suggest there was a ton of important information in that report, it was days before news analysts really dug into the report to reveal some key facts.

Think about the eight nonstop hours of live TV testimony in 2015 of then Secretary of State Hillary Clinton by a House committee looking into the 2012 attack of the U.S. Embassy in Benghazi, Libya.

The January 6. hearings are not like that. Surprising facts of the day are released with each new hearing.

-- Former Attorney General William Barr told Trump that his claims of widespread election fraud were "bullshit” in a video testimony.

-- Cassidy Hutchinson said she was told Trump tried to grab the wheel of the limousine he was riding in on the day, in an attempt to drive the car to the Capitol -- as well as lunging toward his head of security.

Dramatic enough for you? A former reality TV performer turned U.S. president would understand that -- even, according to a White House aide, if he needs to throw lunch against the wall.

Cut to your own image of ketchup dripping.