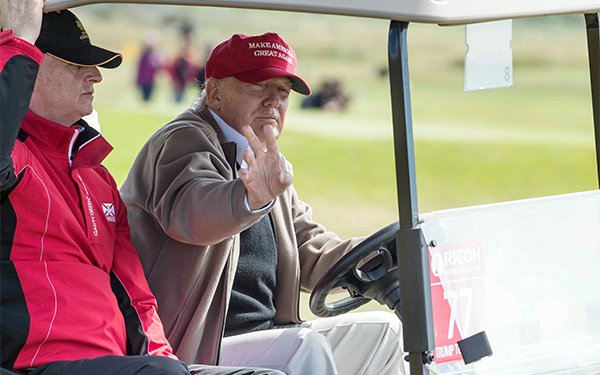 Trump Golf is making a TV marketing push to re-establish its position in professional golf -- which includes a deal with the Saudi Arabia-backed LIV Golf tour -- a growing PGA Golf competitor -- with events to be aired on streaming TV and digital platforms.

This comes as Trump National Golf Club Bedminster, in New Jersey, has announced it will host its first tournament for the new LIV Golf series -- the third in a series of eight overall events. The Saudi Arabia-based golf group is backed by a $2 billion investment, according to reports, with some of the top top players inking $150 million multi-year deals.

The LIV Golf U.S. series of events will close in October at Trump National Golf Club Doral, in Miami, Florida.

In January 2021, the PGA announced it would move the 2022 PGA Championship, to be held in May, away from Trump Bedminster following the insurrection at the U.S. Capitol. The PGA event was held at Southern Hills, in Tulsa, Oklahoma.

For years, analysts have said Trump golf course operations have been struggling financially.

In early June, the debut LIV Golf event in London was not televised in the U.S. -- although it was live-streamed on LIVgolf, com and DAZN, the sports-focused digital platform, as well as on YouTube and Facebook.

For the upcoming U.S. events, streaming and digital coverage will be available on LIVGolf.com, YouTube and Facebook -- but no major TV networks. The PGA Tour recently signed nine-year deals with CBS, NBC and ESPN+ to broadcast coverage of events through 2030.

This comes as Trump may soon be announcing his intention to run for President in the 2024 election.