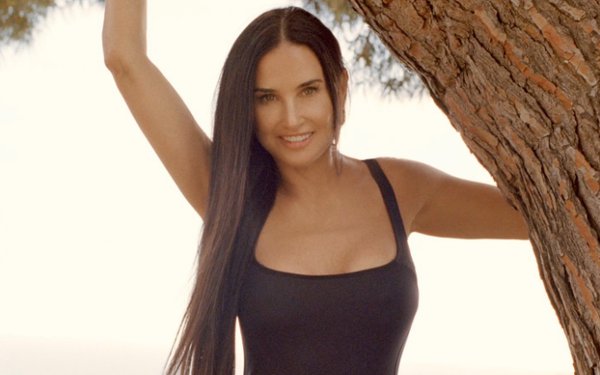 Andie, the swimwear line aimed at women in their 40s and 50s, just launched a collection with actress Demi Moore. The company says this is the next step as it continues to expand, connecting its Instagram-driven audience with swimwear that puts them at ease.

Moore, an early investor in the brand, starred in ads for the D2C company last year, along with daughters Rumer, Scout and Tallulah Willis. That collaboration went so well that Andie decided to try a design collaboration. The 10-item line, with a vintage inspiration, has been a year in the making.

"That campaign was like a breath of fresh air for us," says Michelle Copelman, vice president of brand and design at Andie. "It really helped push our brand's ethos."

Moore resonates with the brand's core audience. "Our sweet spot is this elder millennial and Gen X. She's probably a mom," Copelman says.

And in the often hypersexualized world of women's swimwear, "we've stuck with this identity of taking care of yourself and the planet, making people feel the best way they can."

While that's been true since the company started five years ago, it's gaining relevance as the body positivity movement gains steam.

The new effort coincides with significant expansion plans. Last year, Andie raised $18.5 million in venture funding and will use much of that to beef up its omnichannel offering.

It's expanding to include third-party items and moving into the cover-up category, offering terrycloth and linen items. It's also pushing into brick-and-mortar retail, says Copelman. It's been experimenting with pop-up stores in Florida, Long Island and Berkeley, California, and plans to announce permanent store locations soon.

"You can't beat an in-person experience at that moment for discovery," Copelman says. "Our stores are set up as your ultimate beach vacation shop, with everything from Supergoop sunscreen to indie apparel brands."

Andie's popularity has keyed in on fit, in a famously tricky category. Using a fit quiz, it offers many different ways to personalize suits, from fuller coverage in bottoms to more support in tops.

"That's where we've been able to make our customer feel the most comfortable," Copelman says. "She knows how she wants to feel, and she wants a product that she feels was made for her. It's less about how to conform to this brand identity, and more that this is a swimsuit anyone can wear."

Copelman tells D2C FYI the company continues to be obsessive about that fit, continually adding fabrics to make sure it's got the best in sustainability and recycling.

Photographer Drew Escriva shot the new Moore campaign on the French Riviera and in and around Marseilles.

Andie has plenty of competition. Many companies make swimsuits, with Athleta, Lululemon, Everlane, Nike and J. Crew all having substantial fan clubs. And niche brands, such as Summersalt and Solid & Striped, also do well in the D2C space.