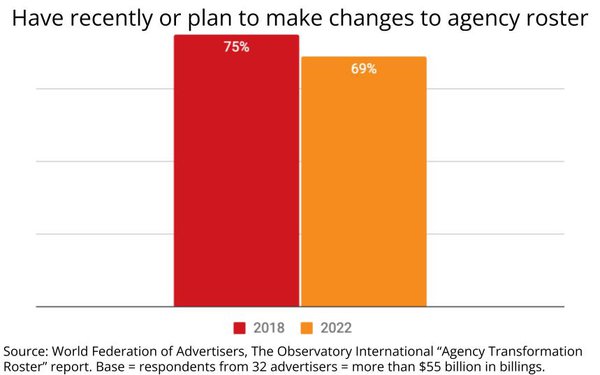 While the vast majority of global marketers have recently or are currently planning to make changes to their agency roster, the percentage has moderated from just a few years ago, according to the 2022 edition of a tracking study released by the World Federation of Advertisers and The Observatory International this morning.

While 75% of agency executives responding to their 2018 survey said their agency rosters were in flux, only 69% said so this year.

Despite the relatively high percentage of respondents making or anticipating changes, this year's study also found that 75% were at least somewhat satisfied with their current agency roster arrangements. That's also a marked improvement from 2018, when the researchers -- utilizing a different format -- found that just a little more than half (5.7 out of 10) of respondents said their current agency roster was "meeting their needs sufficiently."

The report also found there was no single driver contributing to changes in the respondents' agency rosters, but a confluence of variables ranging from the COVID-19 pandemic to underlying changes in the media marketplace.

"New challenges in the last four years such as rapidly changing consumer behaviors and the digital revolution have reinforced the need for new arrangements," the report found.

Interestingly, as improved as the picture may be for current agency rosters, the report also found the "big winner" is in-house agencies.

"Eighty percent of respondents now have an in-house agency set-up of some shape or form, up from 57% in 2020, and a further 13% say that they are considering establishing one," the report concludes, adding, "This change will not only alter agency scopes of work but also will require additional focus on working processes to ensure effective collaboration between external agencies and in-house teams." 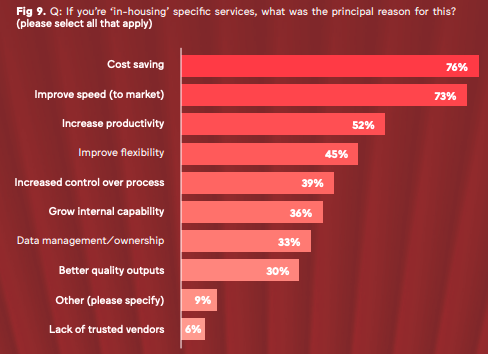