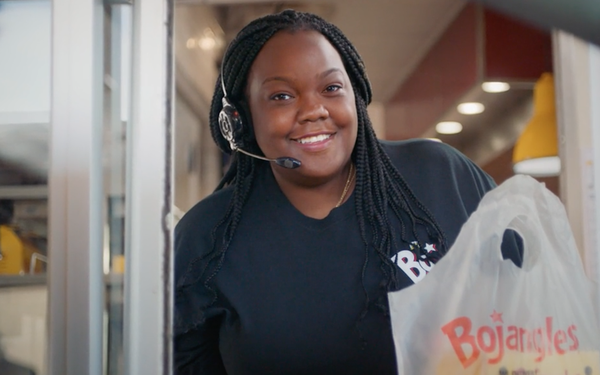 As labor shortages continue to hobble the restaurant industry, Bojangles is putting its employees front and center in a new ad campaign.

Called “Meet the Crew,” the new campaign does double duty, highlighting the tasty complexity of Bojangles’ recipes and the chicken, biscuit and tea-making skills of its restaurant employees.

“Bojangles is about real food made by real people,” says Jackie Woodward, the chain’s chief marketing officer. And while much of the company’s market is devoted to promotional efforts, “we wanted to celebrate our 45th anniversary with a brand campaign that brings that all to life.”

Execs at EP+Co. have been itching to do spots like these since it won the business back in 2019. “As we toured the restaurants, we kept saying, 'This is not the easiest way to make chicken,’ or, 'they aren’t taking shortcuts with biscuits -- this is how my grandmother makes them,’” says John Cornette, the agency’s chief creative officer.

“We call it 'handcrafted hospitality,’ and this just felt like the right time to tell that story,” Woodward tells QSR Land.

The company hopes the campaign will accomplish multiple goals, including increasing the number of job applicants.

The industry’s labor woes continue to drag on recovery efforts. A recent survey from Popmenu reports that 51% of restaurants didn’t have the staff they needed heading into the summer months, and 33% to are not operating at full capacity because of shortages. Increased labor costs, aimed at retaining employees, are also making profits unpredictable.

“We’re facing the same struggles as everyone else in the industry,” Woodward says.

She says the campaign is also meant to acquaint new customers with what sets Bojangles apart as it steps up its expansion efforts. The chain, which went private in a $593 million deal in 2018, recently announced plans to open 46 new stores, extending its mostly Southeastern footprint into Texas, Virginia, New Jersey, Ohio, Maryland and Washington D.C.

Chick-fil-A, its largest competitor, also runs ads starring its employees. “But those ads focus more closely on customer service and hospitality,” Cornette says. “And we’re more focused on the way the crew makes the food --and how much they enjoy doing that.”

Ads are running on regional broadcast TV. In-store activations -- including red-carpet walks and flower bouquets for the workers who star in the ads -- are also part of the effort. And the company is pushing the effort heavily in social and internal channels.