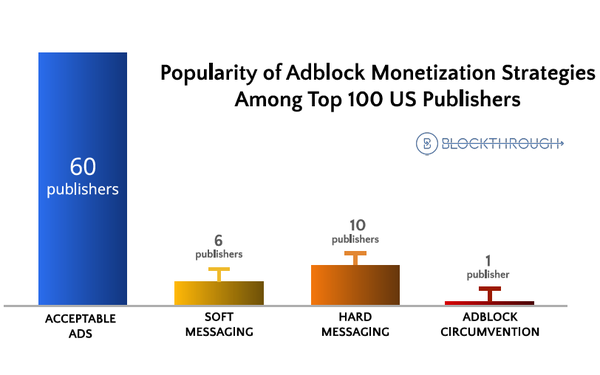 Estimates are conservative, according to the study, and do not take into account wide-spectrum content blockers, VPN/DNS-based ad blockers, and network-level ad blockers

The average ad-blocking rate across geographical locations and verticals is 21%, as measured across more than 10 billion page views on 9,453 websites.

The 2022 PageFair Adblock Report suggests that desktop ad-blocking growth slowed overall between 2016 and 2018, and then declined between 2018 and 2020. In the United States, ad blocking rates came in at 19% -- slightly lower than the global total of 21%.

In order to determine what prompted the decline, Blockthrough analysts focused much of this year’s report on ad-blocking walls, including a study that tested how users react when they encounter ad-blocking walls in the real-world, Marty Kratky-Katz, co-founder and CEO at Blockthrough, wrote in the report.

Findings in the study seem to validate survey findings from last year. About 80% of ad-block users say ad-block walls are an annoyance. The year, the company also included an ad-blocking world map, showing rate by country as recorded by its technology and analytics data.

About 82% of ad-block software users prefer a “lighter ad experience” by default compared with receiving prompts to disable their ad-blocker or whitelist a site.

Opt-in rate for Acceptable Ads has crossed 95% for the first time since the company began analyzing and reporting on its user base, and 94% of global publishers surveyed say they cannot precisely quantify the revenue loss incurred due to ad blocking

The report also found that opt-in rates for Acceptable Ads exceeded 95% for the first time, totaling 216 million ad-block users on browsers and extensions that support it. This represents a 50% increase in user base from the beginning of 2019.

Another interesting point discussed in the study is ad filtering. A few years ago, ad-blocking was all or nothing. Today, ad-blocking technology allows non-invasive ads that comply with the Acceptable Ads Standard to serve to opted-in users.

Acceptable Ads are governed by the independent Acceptable Ads Committee, the Standard defines a lighter ad experience that is considered “acceptable” by at least 65% of surveyed ad-block users.