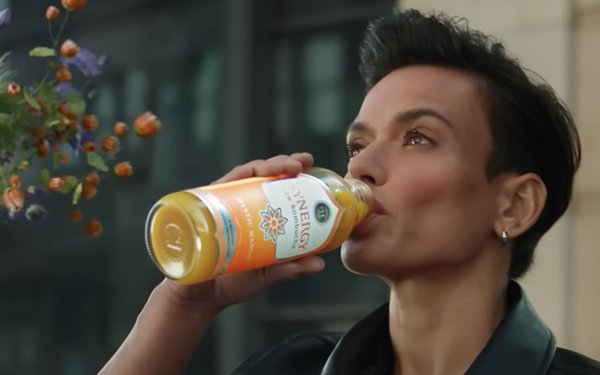 Pioneer kombucha brand Synergy is differentiating itself for first-time kombucha users by calling out the “raw” nature of its probiotic-rich beverages.

That message is being delivered via creative from the Giant Spoon agency in which people are seen imbibing Synergy while walking on downtown Los Angeles streets as a voiceover suggests they “begin with something pure, bright and wild.”

That’s a cue for a plethora of colorful flowers to blossom on signposts, parked cars, streets and buildings.

“Made by nature to transform you,” the voiceover continues.

Launched in the late 1990’s, Synergy is positioned as the original raw kombucha because its fermentation happens inside the bottle, according to Giant Spoon creative director Erin Hauswirth.

“All of the magic that kombucha provides happens after the bottled is packaged,” Hauswirth tells Marketing Daily. “It’s untouched and unmanipulated to make the most probiotics in the fermentation cycle.”

Emphasizing the “raw” nature of Synergy is something for the brand to “hang its hat on because the competitive set is now flooded with so many others,” Hauswirth says.

An urban setting was chosen to “juxtapose the realities of peoples’ everyday lives,” with  a backdrop that’s less than natural, against  “the effect of the product,” adds Giant Spoon creative director Carla Johnson.

Synergy is the brainchild of California native George Thomas Dave—hence the company name GT’s Living Foods—who began bottling small batches of kombucha in his kitchen in 1995 before getting it onto shelves at the Erewhon healthy foods market.

“Often, people are consuming kombucha as part of their daily rituals—whether it’s on their walk to work or during a lunch break or the wind-down at the end of the day,” says Johnson.