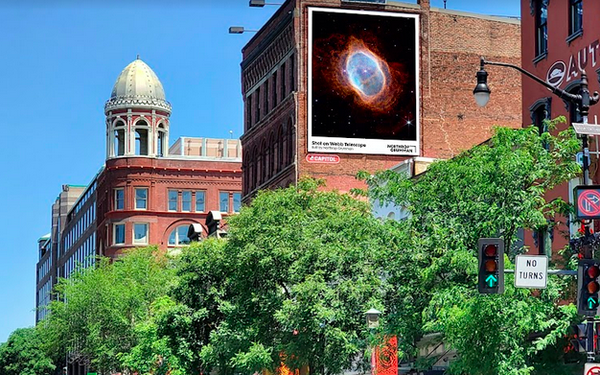 NASA is sharing its stargazing.

It released shots of the Carina Nebula, 7,600 light-years from Earth, home to the Milky Way’s hottest stars, as well as the Southern Ring Nebula and Stephen’s Quintet, this past weekend.

More than just a bonus for astronomy lovers, Northrop Grumman, which partnered with NASA to build the James Webb Telescope, is sending up Apple’s “Shot on iPhone” with OOH placements.

The photos are available to view on Mobile AR  and Desktop AR. Also included is information about the telescope’s craft and sophistication.

The James Webb Telescope is the largest space observatory ever built — 100 times more powerful than the Hubble Telescope.

Denstu Creative handled the work, placed in Los Angeles, near LAX Airport, and in Washington, D.C. The locations were deliberate: D.C. is Northrop Grumman’s Falls Church HQ in Virginia. LA is where the Webb Telescope was built at Northrop Grumman’s Space Park facility.

“Images this beautiful — this monumental — should not be confined to phone or laptop screens. Even TV doesn't really do them justice,” shares Jon Igielnik, associate creative director at Dentsu Creative, on the OOH approach. “This is the universe we're talking about, after all!”