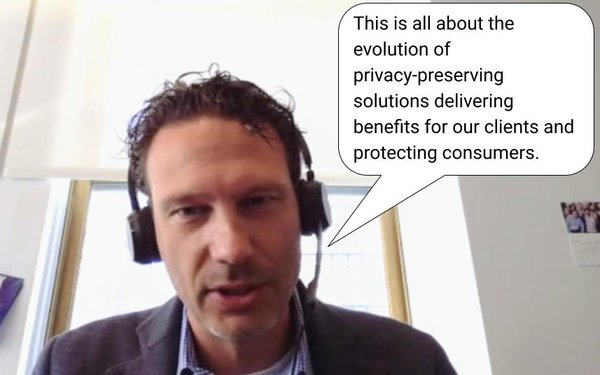 Two years after Brian Lesser took the helm of consumer data management startup InfoSum, it’s emerging as the ad industry’s default “clean room” supplier, and this morning it announced a major reboot making its infrastructure much more streamlined, easier for its advertising and media customers to integrate with without giving up any of its privacy protections.

The reboot, which InfoSum describes as a new platform dubbed “Platform Sigma,” is more of an evolution and refinement of its infrastructure, according to one of its biggest customers, Omnicom, which last year integrated InfoSum as the clean room for managing – and protecting – consumer data through its in-house data management system, OMNI.

“This is all about the evolution of privacy-preserving solutions delivering benefits for our clients and protecting consumers,” says Slavi Samardzija, global CEO of Omnicom’s Annalect unit, which has overseen the development of OMNI.

Samardzija says the new version of InfoSum streamlines processes, especially the integration of multiple sources of consumer data – from first-, second- and third-parties – that otherwise would require users much more time and resources to set up, while ensuring the data remains both integral and secure.

“Privacy is at the core of everything we do as an industry,” he says, adding that InfoSum’s new platform removes much of the friction that might otherwise go into ensuring it.

A core aspect of that is making the exchange of data more “interoperable” between the various technology and data stacks of organizations, including advertisers, agencies, media and consumer data suppliers.

Before investing in and ultimately becoming chairman-CEO of InfoSum, Lesser was a long-time WPP and GroupM executive responsible for developing much of its consumer data targeting and trading infrastructure, before moving on to AT&T’s (now Microsoft’s) Xandr unit.

“Platform Sigma represents the next stage in data collaboration, eliminating all barriers to entry for enterprise organizations to extract the full value from their first-party data – safely and securely – with no risk and no limits,” Lesser boasts in a statement.