Taking The Pulse Of Today's Shoppers 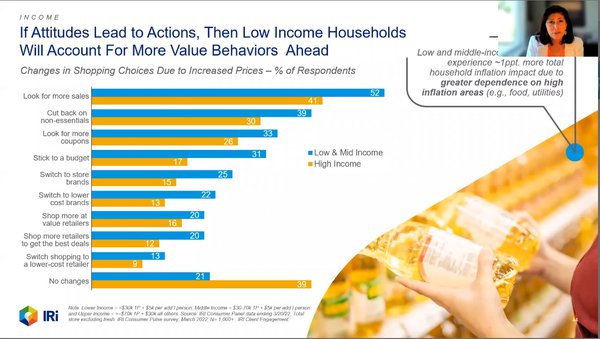 These are unprecedented times for U.S. shoppers. Prices are soaring because of inflation -- and, unlike with past recessions, there are now multiple forms of media to reach consumers.

We recently spoke with MaryEllen Lynch, principal consultant and team leader at IRI, about the current environment and how it compares to past crises. Below are some excerpts, edited for clarity, from that conversation:

Marketing Daily: Everyone’s talking about inflation, but what are some other factors that shoppers are dealing with?

MaryEllen Lynch: Everyone’s chasing this idea that there's gonna be a big shift to private label, but we're actually not seeing that. Ninety-nine point four percent of U.S. households purchase a CPG store brand or private label product in the first half of the year, whether they realize it or not. But in an average total household, 17.5% of their budget is spent on store brand. For the mid-income households, it's 18%.

What we've been seeing is people are spending more, but they're buying less.

Marketing Daily: How is that?

Lynch: So think about it. A household, has, let's say, $300 a month to spend. So now, all those things they typically buying now cost, you know, $340, well, they still only have $300 to spend, they're going to buy less. And so what we're seeing is they're backing away from non-essentials -- and really shopping around more.

Marketing Daily: Are there certain categories that are most affected in a recessionary period like now?

Lynch: So eggs, meat, you know, milk -- those type of categories, and where the consumers will seek to economize with private label. They'll test out the private label in areas that are more like a commodity than in the areas where they're highly engaged with brands.

So salty snacks, carbonated soft drinks, candy, the amount of work that's been done to build and maintain those brands, makes it difficult for private label in those categories. And consumers will scrimp and save to get their favorite brands. So categories that are more commodity-like or where there's just heavy inflation is where they will lean in most.

Marketing Daily: How is this different from 2008?

Lynch: It's different. People have jobs, but the consumer is continually being told the recession is coming. Well, only certain components of the recession from a technical standpoint exist. And if consumers needed more money, many of them really could get another job. Like a part-time job, right. So it's a little bit different.

This is unique. In all other cases, in the early '80s, that was unique. In 2007, 2008, that was the housing bubble. People were way deep in their housing lending crisis. This is different.

Marketing Daily: Are there any categories that are doing very well right now?

Lynch: For low-income households, products like rice, flour, dried beans, vegetables, tea, gravy mixes, day sauces, refrigerated pizza. Refrigerated pizza has been coming up for a while through the pandemic. It's just a quick grab and go, and many of the retailers leaned into making their own.