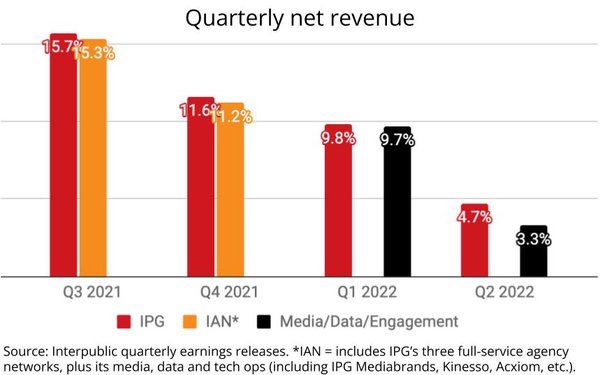 While Interpublic does not break out the explicit results of its media operations -- chiefly IPG Mediabrands -- in its quarterly reporting, the segments it includes them in have been lagging the overall companies growth in recent quarters, falling to a low in its most recent reporting for the second quarter of 2022.

Based on quarterly net revenues, IPG's "Media, Data and Engagement" segment, which has included IPG Mediabrands, and data marketing operations Kinesso and Acxiom for the past two quarters, grew only 3.3% in the second quarter vs. 4.7% overall for Interpublic.

IPG previously bundled those divisions in a segment (IAN) that also included its three full-service agency networks (McCann Worldgroup, Foote, Cone & Belding, and MullenLowe Group) so apples-to-apples comparisons are not available prior to 2022.

Kiernan is the sixth person -- and first woman -- to lead Mediabrands since it was formed by Nick Brien in 2008.

Brien was succeeded by Matt Seiler in 2011.

Seiler was succeeded by Henry Tajer in 2015

Tajer was succeeded by Philippe Krakowsky (then Mediabrands chairman and currently IPG CEO) in 2017.