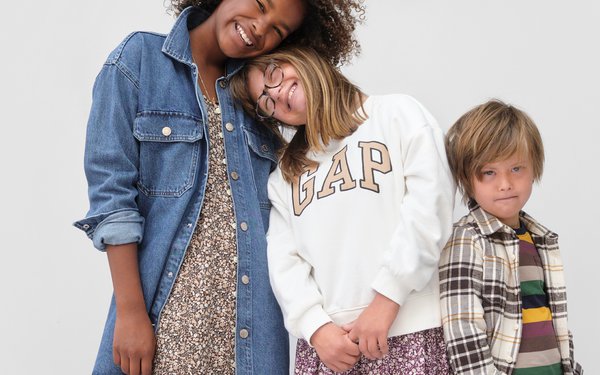 While Gap famously fills its ads with upbeat and energetic kids, a closer look at the cavorting children in its new back-to-school campaign reveals a shift.

From a 13-year-old tossing basketballs from her wheelchair to 4-year-old racing on prosthetic legs, the company's "Everyone Belongs" campaign is designed to highlight extreme individuality and abilities -- all while styled in loose denim, khaki, pocket tees and Varsity jackets.

Mary Alderete, Gap's global head of marketing, tells Marketing Daily  the effort links to author Heather Avis' book of the same name. Avis, a former educator, has adopted three kids, two of them with Down syndrome.

"We had partnered with her on her first book, and it fits with our longstanding platform of celebrating individuality," Alderete says. "For this new work, we were inspired by the idea of celebrating how kids can be their authentic, true self -- but also celebrate the diversity of abilities. We want to create a better space where everyone can connect and belong."

Kids in the ad even styled many of their own looks, choosing from this year's '90s-inspired collection.

While Gap has long promoted diversity in its marketing campaigns, other retailers are quickly catching up.

To maintain Gap's difference, the brand has to move past simply casting kids of all abilities and races, "but move into education, too," says Alderete.

That includes a podcast with Avis, helping to understand Down's Syndrome.

Gap's also donating 20,000 copies of the book to schools. "We want to give kids tools to embrace inclusivity and make it happen."

The campaign also includes a social component, with the retailer asking families to upload their kids' talents using the #GapKidsBelong. "It's just another way to say everyone matters," Alderete says. "Everyone belongs."

The retailer is also expanding its efforts with Roblox, so kids can further explore Gap clothes.

Ads are scheduled to run on TV for the next three weeks, and the campaign will continue well into September --  quite late for traditional BTS ads.

Because of economic pressures, "it might be that this year that parents don't just go all in all at once," adds Alderete.

She says the company's price points are especially meaningful this year. "Things are still a little bit uncertain and a little bit challenging. We're offering trend-right fashion and essentials at a great price."

Meanwhile, plenty of other news -- and question news  -- is coming out of Gap's San Francisco headquarters. First, Yeezy Gap, its controversial design partnership with Kanye West, just announced it would move into physical stores for the first time. Along with the redesigned physical space, it will include the Yeezy Gap Engineered By Balenciaga collection.

And earlier this month, Gap announced the abrupt departure of president and chief executive officer Sonia Syngal. Bob Martin, its executive chairman of the Board, becomes the interim CEO.