New Index Ranks Brands Based On Misinformation Risk, Tesla Is No. 1 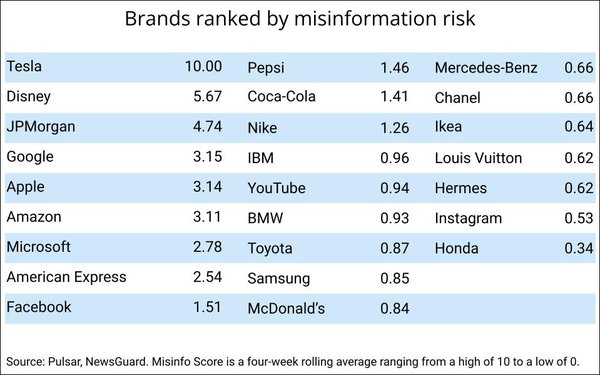 Tesla ranks as the brand most at risk for showing up in content that is deemed misinformation, according to a new brand "Misinformation Risk Index" released today.

The index -- a collaboration of digital content misinformation ratings service NewsGuard and Pulsar a research company that utilizes AI and proprietary methods for analyzing the type of content brands show up in -- likely is a first-of-its-kind rating for brands based on their risk from misinformation.

For the purposes of the new index, Pulsar is utilizing Interbrand's list of the 25 "most valuable brands," and its "Misinfo Risk Index" scores are based on a rolling four-week average with score ranging from a high of 10.00 and a low of 0.00.

Pulsar will refresh the index every Monday, but based on this week's release (updated this morning), Tesla ranked with the highest risk score -- a 10.00 -- for each of the past four weeks.

"Since we started work on the index, Tesla has consistently emerged as one of the brands most exposed to misinformation risk -- a trend that has only intensified in July," explains Davide Berretta, a member of the Pulsar team.

"There has been a succession of stories which those publishers are gravitating towards which help explain this performance, from [Tesla Founder Elon] Musk supposedly going ‘missing’, to stories around EV charging, to the Twitter takeover, and most recently the story around Musk’s alleged affair with Sergey Brin’s ex-partner.

Tesla's risk score is nearly twice as much as the next most risk-exposed brand in this week's ranking, Disney, which has also been prone to politicized debate in recent months.