In Private-Label Push, Dick's Gets Dance-ier 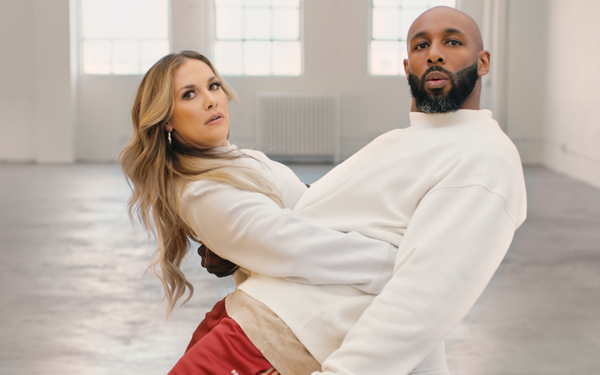 Dick’s Sporting Goods is leaving golf and soccer balls behind in a new push for its private-label apparel, strengthening its relationship with the social-media dance stars tWitch Boss and Allison Holker. It’s also introducing a new back-to-school campaign focused on style. And it’s moving into the metaverse, with a game-playing experience on Roblox.

The dancing duo is modeling their third collaboration with DSG, one of the many private-label brands Dick’s is focusing on. In spots created by Pittsburgh-based Where Eagles Dare, the pair wear DSG’s streetwear-casual looks as they dance their way through to another dimension.

“DSG is made for every member of the family, and it’s about making movement accessible and fun,” says Kate Fedishen, vice president of global brand and category marketing at Dick’s. “Dance is a natural fit, but the technical aspects of the apparel are also there, so you can wear it for soccer, basketball or any other sport.”

As ever, the real-life couple’s moves are less about their looks and more about the vibe. “tWitch and Allison’s energy is infectious,” she tells Marketing Daily in an email. “We love their love for their family, and they have such a relatable and fun approach to fitness that aligns with the brand.”

The line “is all about being active, inclusive and accessible, and tWitch and Allison have a special way of engaging with audiences to make everyone feel connected.”

While Dick’s prides itself on solid relations with brands like Nike, Adidas, Under Armour, Patagonia and Birkenstock, increasing sales of private-label apparel is a core part of its strategy.

It says the sales of these house brands offer a significantly higher profit margin and accounted for 14% of all sales in 2021. That’s $1.7 billion, making its own brands the retailer’s second-largest vendor.

DSG is the largest private label brand, followed by yoga brand Calia. Dick’s launched that collection in 2015 with singer Carrie Underwood, who is no longer associated with it. But it continues to grow, and the retailer has even tested it as a stand-alone concept with pop-ups.

VRST, a premium men’s performance line, is the third largest.

The company also just announced "School of Sport," an interactive Roblox experience on where users can compete for style points, winning the ability to dress their avatars in the latest back-to-school looks from Dick’s. The game includes six virtual spaces at Dick’s Sporting Goods High. And it aims to replicate real-world high school, from shooting hoops to an outdoor cafeteria.