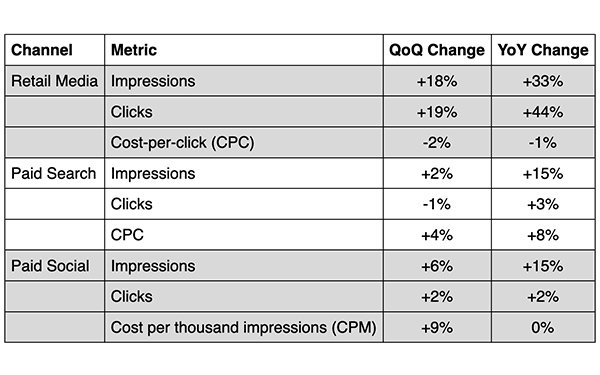 Despite recession fears, overall, spending growth rose in the second quarter of 2022, with retail media spending up 42%, paid social up 15%, and paid search up 11%, according to data released Wednesday by Skai, an omnichannel platform for performance marketing.

The insights are part of its Q2 2022 Digital Marketing Quarterly Trends Report, an in-depth analysis of digital marketing trends during the past quarter.

“The search results were not surprising, because it’s been pretty consistent with how things have been shaking out during the past couple of cycles,” said Skai Senior Director of Marketing Research Chris Costello. “We saw stronger search spending compared with the rest of the market, which is evident in Meta’s revenue numbers [released Wednesday].”

Search spend continues to migrate from the Expanded Text Ad (ETA) to the Responsive Search Ad format, reaching the point where RSA is now the dominant format, according to the report.

The media comprises 38% of total Q2 spend compared with just 23% in the second quarter last year. ETA spend dropped to 27% from 40% spend during that same time period, with shopping ads making up most of the balance.

With a myriad of solutions and workarounds in place for these disruptions this year, monthly spend in paid social media has been much more stable in 2022. Advertisers are adjusting to Apple’s Identifier for Advertisers (IDFA), a random device identifier assigned to a user's device, according to the report.

Skai also has insight into retail companies such as Amazon, Instacart, Kroger, Walmart, as well as Criteo, and Citrus Ads. Other retailers get funneled through the data and platform, but retail-related data from those companies make the majority.

More retail brands tried to reach a larger group of shoppers while they were in-market, which drove most of the growth for the quarter. The media also benefited from investment on commerce-focused ad types and from commerce-focused advertisers. It was only in paid search where investment appeared to follow the macroeconomic trend away from goods and toward services, according to the data.

“What’s intriguing about retail media networks is it offers brands that have not typically engaged in direct response marketing or performance advertising to see the direct return,” he said. “CPG brands that funnel money into the stores had a broad view of returns. Now they can run specific ads through Amazon and see the return.”

Costello believes how the fourth-quarter holiday season shakes out will depend on the third quarter, because “it’s the one where advertisers will be more sensitive. Looking back to the end of 2008 and 2009, we saw a bid of downturn momentum, even though it was a different kind of recession. We saw a downward trend in Q3, but stronger in Q4.”

He said marketers will not necessarily cut budgets in Q3, but defer the spend until Q4 when they know consumer demand will increase.