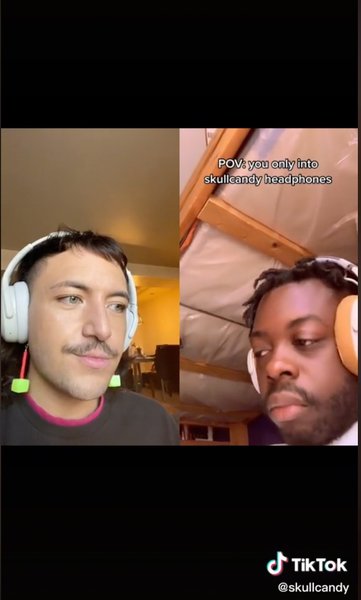 Providing an example of how brands can market on TikTok without using paid ads, Skullcandy has used the platform’s Duet and Stitch tools to post augmented versions of user-generated content touting its Crusher Evo headphones.

Altogether, the UGC and Skullcandy videos have garnered more than 13 million organic views over the past seven weeks, a 400% increase in web traffic, a huge spike in Google Trends -- and a sales boost.

“When we started to see a serious uptick in UGC around our Crusher Evo sensory bass response, we immediately knew that we wanted to acknowledge and celebrate the trend without coming across too heavy-handed,” Kalin Stewart, Skullcandy’s global brand and social manager, tells Marketing Daily.

“Duet and Stitch are the perfect tools for amplifying the fantastic content that people are already creating and leveraging the platform’s offerings to respond to our fan base in a fun, community-centric way.”

The“campaign” began June 7th, when @realchosenonex posted a video of himself listening through Crusher Evo headphones and then reacting as he switches to the product’s “Adjustable Sensory Bass” feature, which the brand says can produce “bone-rattling” bass. The post has since racked up 1.1 million views.

On June 15, @Skullcandy posted a Duet video in response, adding a second person who appeared to be sharing the same music and reactions as @realchosenonex.

Other TikTokkers were also posting their reactions to the Crusher Evo headphones, including @justingerber2.0  on June 19. That video has since garnered 1.2 million views.

Four days later, @Skullcandy posted a Stitch video in response, adding a scene of water shaking in a cup due the headphones’ sound. The brand used “Not today Vecna” and a #StrangerThings hashtag in its caption, playing off of a plotline in the latest season of the 1980s-set Netflix series. In the show, a main character is saved from villain Vecna by listening to music through a pair of headphones.

“Not only did this storyline offer up a clear connection with our product, but the show has gained a considerable amount of traction within the TikTok community, making it the perfect trend for us to tap into,” says Stewart.

In addition to using Duet and Switch, Skullcandy has also posted responses to CPG videos, such as this one that’s gotten over half a million views. The user had asked “Wouldn’t this damage my eardrums,” to which @Skullcandy explained that its headphone feature increases bass levels but not volume.

As a brand targeting Gen Z, Skullcandy is a big TikTok fan.

“It’s been important to us to put time and energy into learning what resonates organically with our audience, and supplementing with paid very selectively,” notes Stewart.  “Plus, half of the fun is getting creative and trying out new content formats. TikTok is an inherently playful channel, so mixing things up and seeing what sticks has proven to be a big part of our success.”

She notes that “since this is an organic trend and not associated with a brand hashtag that’s easily trackable, the number [of views] is likely far in excess of 13 million.” This Wednesday alone, she says, Skullcandy saw nearly 30 new pieces of associated content.

As a result of TikTok, the Crusher Evo headphones sold out on Skullcandy.com.

Usually when a product sells out, “we see a trickle of ‘notify me’ signups,” Stewart says. “In the instance of Crusher Evo, a massive 1,900% increase in ‘notify me’ sign ps is our strongest indicator of demand generated from this trend.”

And TikTok has a spillover effect, she adds: “We’re seeing engagement spill over onto other social platforms and translate into demand on Skullcandy.com and retail partners -- further proof that TikTok can be a powerful tool for finding and connecting with fans and ultimately driving sales.”