Their Lives As Rolling Stones: Band Members Have Their Say 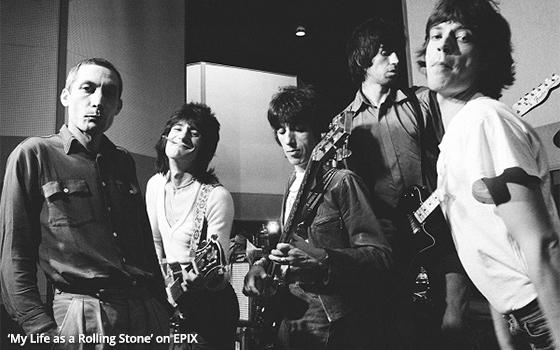 Four members of the Rolling Stones each have their say in the four-part documentary “My Life As a Rolling Stone” coming to Epix on Sunday (August 7).

Not surprisingly, Mick Jagger, 79, gets the first episode to tell the story of the band from his own point of view.

Subsequent episodes are, in order, Keith Richards, 78, Ron Wood, 75 and Charlie Watts (who passed away last August at age 80).

Jagger and Richards were members of the band from its beginning in 1962. Watts became the band’s drummer the following year. Ron Wood joined the band in 1975.

From the outset of Episode One, the impression is given that this documentary will be different from all others that have come before about the now 60-year-old rock band that stands at the top of the rock ‘n’ roll pyramid.

In opening remarks, Jagger himself promises that the documentary will be like no other. It will avoid the usual platitudes and clichés that the world has come to expect from these kinds of documentaries for the simple reason that the story will be told by the Stones themselves.

In actual fact, however, this is not what happens. Instead of an in-depth interview with Jagger in the first episode, for example, a slew of other, off-screen notables supply the quotes that attempt to explain the band’s fame and endurance, and position it in the history of music.

Hearing all of these outside opinions from the likes of Sheryl Crow and Jon Bon Jovi had me wishing that Jagger was explaining all of that, not them.

Having said all that, “My Life As a Rolling Stone” is nevertheless a joyous nostalgia-fest for anyone who loves the Stones and still listens to them.

Old footage is abundant from interviews and news conferences, TV performances and the scenes of teen chaos that characterized so much of the rock ‘n’ roll experience in the years when the Stones began.

Mick himself credits the teen music shows on English television in the early-’60s -- most notably “Ready, Set, Go” -- with playing a key role in the Rolling Stones’ early fame.

“Television is hugely important,” Jagger said. “Millions of people would watch these shows. When I was a teenager, you would never miss those shows.”

When he is seen on screen in the documentary, he comes across as self-deprecating, even modest. “One of my jobs was to be a big showoff,” he says with a grin.

But at the same time, he also gives an impression of a man in charge who exhibited extraordinary show business instincts from an early age, almost as though he was born with them.

Among other things, he says he used to visit the studios of the old teen music TV shows hours before he and the band were scheduled to appear and basically choreographed the whole thing, including lighting and camera shots. At the time, he was barely out of his teens.

music, television
1 comment about "Their Lives As Rolling Stones: Band Members Have Their Say".
Check to receive email when comments are posted.
Next story loading