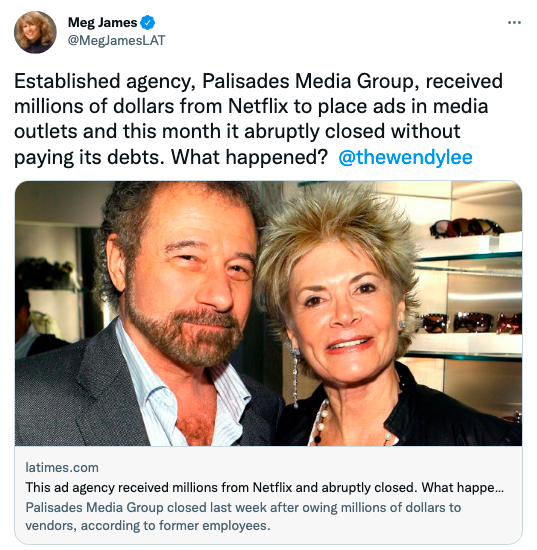 “We are sad to inform you that after 26 years as part of the advertising community, Palisades Media Group has closed its doors. Our new mailing address is PO Box 1429, Pacific Palisades, CA 90272.”

If you go to the now defunct Palisades Media Group website, that’s the message that greets you. And that’s it. The Santa Monica, CA-based agency, with about 100 staffers also had outposts in San Francisco and New York.

On July 27th, The Los Angeles Times reported employees were stunned when they got a memo from agency head Roger Schaffner on July 15 saying the agency was shuttering. No advanced notice and no severance.

According to the LA Times report, the agency owed millions of dollars to various media companies including itself and The New York Times, which the LA Times said has sued in a bid to get back some $1.9 million in owed fees.

The agency’s biggest client was said to be Netflix, although that firm used multiple agencies including IPG media agency Mediahub.

Other companies on the Palisades Media client roster were Arlo Technologies, Duluth Trading and Mercury Insurance.

The agency was known for its work with Hollywood production companies. It opened in 1996 with Miramax as its anchor client.

So far the company does not appear to have filed for bankruptcy protection in the California courts.

Schaffner did not immediately respond to a query seeking comment on the closure.

Some were reminded of another mid-sized media agency that out of the blue shuttered its doors nine years ago—KSL Media.

Sources described Palisades as a shop that flew “under the radar.” Schaffner was described as someone who was loyal to employees, perhaps to a fault—infrequently cutting back on staff even in the face of client cutbacks. “That could have been part of the problem,” opined one source.

The news is never good when an agency goes belly up, particularly smaller and mid-sized shops like Palisades. You can be sure the bigger agencies will be probing like sharks smelling blood in the water for new accounts, no doubt waving Palisades’ obit notice at new prospects.

The agency kept up its Twitter account to the end. Just three days before closing it congratulated Netflix for its 105 Emmy nominations.