Trump Duffs For LIV Golf, But Where's The TV Coverage? 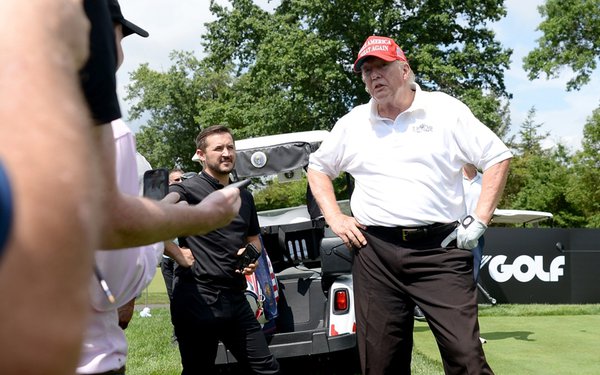 Maybe you just need a fist bump from the Saudi Arabian crown prince.

Or maybe you need more. So offer your Bedminster, New Jersey golf course -- for a price -- so big-name golf pros can essentially play for what analysts have essentially called a high-priced exhibition to adoring crowds.

The fist bump was with President Biden in mid-July. The latter event -- with former President Donald Trump -- occurred this past weekend.

In either case, TV coverage came up short.

There was a brief clip of Biden's interaction. Perhaps the fist bump was not a great move. But as far as we can tell, no money was exchanged.

Not so for the Saudi's big new golf organization -- LIV Golf -- holding a golf tournament at Trump's golf course.

LIV is backed by the Saudi Arabian Public Investment Fund, which is throwing plenty of money around to attract PGA pro, as well as whatever  it paid Trump Golf, which will also host a second event later this year in Florida.

Factor in reports of financial difficulties for Trump Golf in recent years , and the fact that the PGA pulled out of Trump's Bedminster venue in early 2021 just after the January 6. insurrection.

The only traditional TV coverage was with Trump himself, who defended hosting the golf event despite the connection between Saudi Arabia and the 9/11 attacks, the assassination of Washington Post journalist Jamal Khashoggi, and other questionable acts.

“Well, nobody has gotten to the bottom of 9/11, unfortunately, and they should have,” he said.

Really? Fifteen of the 19 hijackers were Saudi nationals, according to a document released by the FBI last year detailing hijackers' contacts with Saudi associates in the U.S.

A group called "9/11 Justice" released a TV ad before the event angry that the tournament was being held “50 miles from Ground Zero” in New York City. Family members accused the Saudi Arabian government of “sports-washing” the kingdom's reputation.

And though there has not been traditional TV play-by-play coverage of the event -- or plans to do so for seven events to come -- next year will be different.

And will Trump get some of that coverage as well? Perhaps running for office again?

With Fox News Channel turning away from Trump in terms of recent coverage, and little chance of his Twitter account being resurrected, expect perhaps a political message or two at the 18th green.

Have some “political washing” while you're at it.