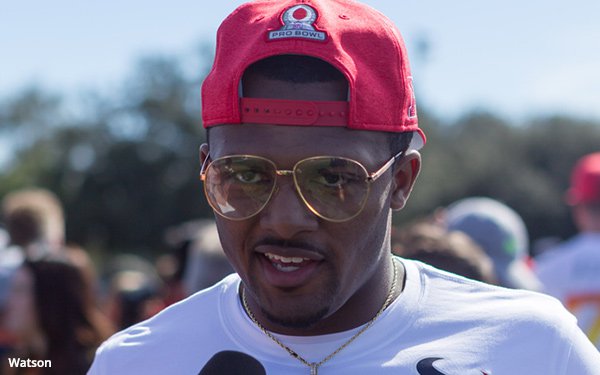 A six-game suspension does not seem like much for NFL quarterback Deshaun Watson -- after 25 different women have made allegations of assault and sexual misconduct during massage sessions.

No criminal charges were filed against Deshaun Watson. So let's ask the next obvious question: Will the patina of the NFL -- the leading TV franchise in viewing and advertising -- take a hit? Hmmm.

Some people point to settlements reached between Watson and all but one woman as being a strong element in Watson's favor. But the bigger picture goes deeper.

Just before this latest news of the settlement broke -- but after those 25 accusations -- the Cleveland Browns signed Watson to a crazy-high $230 million, five-year deal -- the richest deal in NFL history for any player.

And oh yeah -- Watson only stands to lose only $345,000 if the suspension is unchanged. All this is a lot of financial faith.

The NFL let a retired judge decide his fate. And while that judge, Sue L. Robinson, cited Watson's actions as "more egregious than any before reviewed by the NFL,” she only gave him a six-game suspension.

Now, the NFL doesn't like that -- at all. The league wants at least a one-year suspension.

The NFL players union argues that Watson should not be punished at all, because he was not convicted of a crime. But -- 25 women? And nothing was going on?

The NFL has had many off-field issues over the years with players -- incidents in bars; violent acts; illegal use of performance-enhancing drugs; other documented abuse of wives and girlfriends; as well as social issue protests from ex-NFL player Colin Kaepernick, where he -- and then other players -- knelt during the national anthem.

The response to any of these activities -- from marketers -- has always been muted. Few, if any, have been willing to step up and announce their intentions to pull back on their NFL schedules.

This is not to say that the NFL has not had its share of player suspensions.

Guessing what the on-field and off-field actions by athletes are always are two separate things. So far.

,p> There is always the public-profile messaging of sports league organizations when it comes to business partners -- like advertisers -- and ultimately all being the NFL's customers.

The NFL is not just shrugging its shoulders here. Perhaps it knows its hard-core -- some would say tough and violent play on field -- doesn't always mean players' actions come to a full stop off field.

So the question remains: Will there ever be any real consequence for consumers -- either at the games or via any and all video screens -- as a result of any of this?