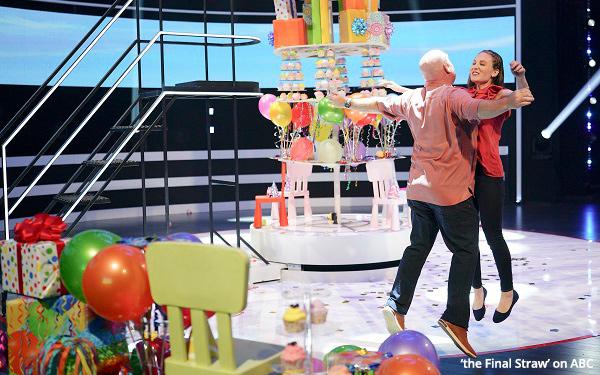 Forget about millennials “adulting.” What about older adults “childing”?

While watching the silly summer game show on ABC called “Final Straw” recently (for work, not enjoyment), it dawned on me: We live in an era you might call the Age of Immaturity.

In “Final Straw,” grownups such as the contestants seen in the photo above get together in teams to dismantle elaborate, “themed” towers assembled from a variety of parts.

The show’s towers are life-sized -- i.e., they “tower” over the contestants, who are tasked to remove each tower’s parts one by one. The object is to remove as many of them as possible without toppling the tower.

The game bears similarities to Jenga, and also to the piling of building blocks by small children who then become delighted when “all fall down.”

“Final Straw” premiered as a summer game on ABC on Sunday, July 10, from 9 p.m. to 10 p.m. Eastern, where it has aired weekly ever since.

On the show, adult contestants high-five each other and leap excitedly off their feet for airborne chest bumps after an object is successful removed from their tower.

The contestants chest-bumping in the above photo were seen in the July 31 episode titled “The Wedding Crasher.” The title refers to the wedding theme of the episode’s multi-tiered tower.

But wait, there’s more! The action is sometimes enlivened by the sudden appearance of a panda bear named Tipsy. Oh no! Tipsy wants to tip over the tower! Bad Tipsy!

Please note that Tipsy is not a real panda but someone in a panda suit. Nevertheless, he’s super cute!

A super-cute panda, high fives and chest bumps like a high-school basketball game, and the sheer delight of a tower of funny objects tumbling to the floor sounds like a kids’ game -- except for the fact that this kids’ game is being played by adults.

Let the record show that the TV Blog does not blame ABC for putting this thing on. It is the network’s job to mount TV shows that attract attention and viewership sufficient to justify the costs of putting them on -- no matter how silly they are.

As for the adult contestants who agreed to compete on this show (for a grand prize of $250,000, after all), they have every right to participate in whatever they want, whether or not the TV Blog approves.

As we all know, Americans are a very fun-loving people. We love watching sports and TV. We love parades, three-day weekends, vacations and summer Sundays.

Understandably, many Americans would love the opportunity to compete for $250,000 too, and many of them would not mind acting like children to do so.