'League Of Their Own' Movie Adapted For Amazon Drama Series 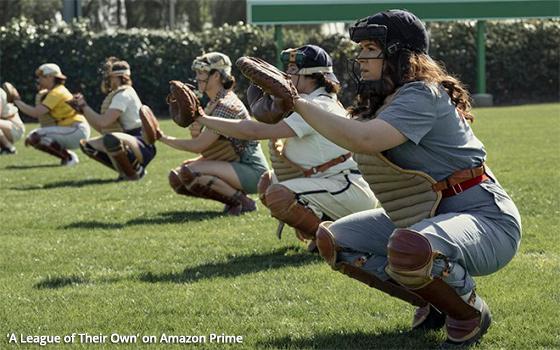 A well-remembered movie from 1992 about a group of women athletes struggling to overcome social barriers in the 1940s has been adapted for a new streaming series in 2022.

The movie was “A League of Their Own,” directed by Penny Marshall and starring Geena Davis, Rosie O’Donnell, Madonna and Lori Petty as members of an all-female professional baseball team and Tom Hanks as their gruff but lovable manager.

The movie’s premise was based on the true story of female professional baseball that sprang up during World War II as men were drafted or enlisted in the armed forces to participate in the war effort.

On the home front, women took up many of the occupations from which they were generally excluded, such as assembly line work in the munitions factories.

The story of the female baseball teams of the era fits loosely into the same historical framework. Certainly, their promoters hoped interest in watching women play baseball would be profitable.

So they set about searching for women who could play baseball well enough to draw a crowd.

In the TV show, they have plenty to choose from as women from all walks of life converge on a fictional ballpark in Chicago to try out for a new team, the Peaches, to be established in the small city of Rockford, Illinois.

In Episode One, we meet the aspirants (otherwise known as the main characters) and get a taste of what they face. All of the women face attitudes of bias that were typical of the time.

One of the characters has an extra layer of prejudice to overcome. She is the only African-American woman to come to the tryouts and she is initially told flat out that her kind is not welcome on the team.

And there you have it: The story of a group of plucky women from diverse locations and backgrounds who come together as a team in 1943 to prove that they can play baseball as well as any man, and in the process, make a stand for the advancement of women’s rights.

Stir in the race prejudice story and you have an eight-part drama series that is tailor made for our times, even though it tells a story from 79 years ago.

In the TV show, some of the memorable characters from the movie are revived, but with subtle differences -- most notably various name changes.

For example, Geena Davis’ character, the catcher Dottie Hinson, is now named Carson Shaw, and still a catcher. She is played by Abbi Jacobson, who is also credited as co-creator of the series.

All eight episodes of “A League of Their Own” start streaming on Friday, August 12, on Amazon Prime Video.