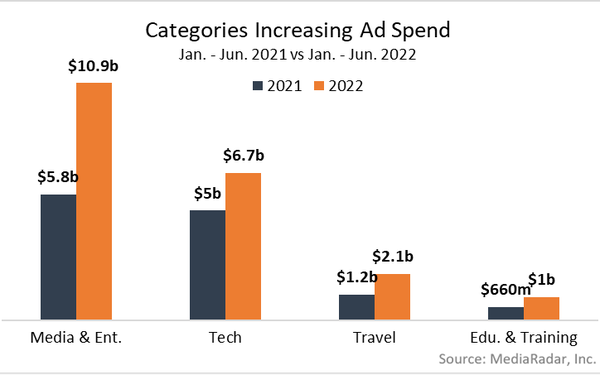 The market has shifted with a possible recession, and now streaming media companies, for one category, have pulled back – along with alcoholic bevs and pet supplies.

Others, such as media/entertainment, tech and travel, increased ad spend significantly during the first half of 2022.

The streamers’ retreat was hardly enough to put a dent in the overall media/entertainment category, though, as spending rose 88% YoY, to $10.9 billion. More than $1.2 billion of that came from ads promoting movies, an increase of 325%.

Other categories that increased ad spend were:

MediaRadar said mobile phones, tablets and other consumer electronics companies increased their spending 284%, to $71 million, with spend spurred at least in part by the end of semiconductor chip shortages (which meant more products on the market).  In particular, Alphabet, Apple and Samsung spent over $597 million to promote new phones.

Business-related software was also up, with advertising/marketing software soaring 274% to $127 million, financial software 128% to $196 million, and HR software 417% to $95 million.

More than $363 million of that came from cruise lines, which increased spending 250%.

Airline spending rose 140%, to $190 million, with Delta, Southwest and United accounting for 71% of that figure.

Five states alone-- Florida, California, South Carolina, Virginia and Michigan – spent more than $140 million.  International locations, such as Brazil, spent more than $1.3 million, a truly gigantic increase from 2021, when there was no ad spending at all from the category.

However, this category spent slightly less YoY in June after increases during the preceding months.

Categories with ad spending declines during the first half of 2022 included:

This included a decrease of 96% by wine subscription companies, mostly driven by wine, which reduced spending 98%; and a 65% decrease, to $499,000, by wine importers.

In June alone, this category spent 26% less YoY, dropping to $283 million. During the first half of the year, desserts and sweets advertisers decreased spending 81%. Among QSRs, Milk Bar’s spending dipped 99% and Krispy Kreme’s 76%.

“During the pandemic, many people bought pets and pet supplies,” MediaRadar said, so the “initial costs of pet ownership -- shots, crates, beds, etc. -- were incurred last year” and it was no  surprise that the pet market’s spending was dropped  8% YoY from January to June.