Science Guy Nye Warns: The End Is Near! 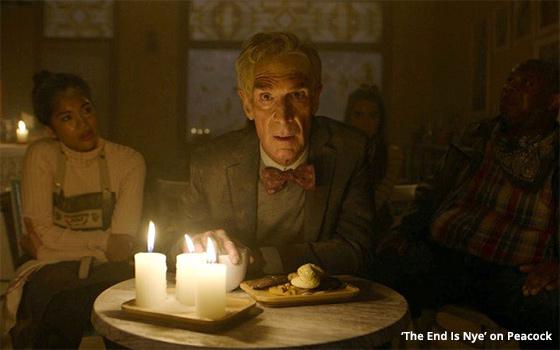 Former kids’ show host Bill Nye, known as the Science Guy, is positioned as the voice of doom in a new show coming this week to Peacock.

His dire warning of the approach of the end of days is reflected in the very title of his new show, “The End Is Nye.”

Indeed, in the publicity photos for the show such as the one above, Science Guy Nye adopts the countenance of a rural preacher who looks like he is about to exhort his flock to prepare for Judgement Day.

According to Peacock, “The End Is Nye” will have this intrepid science guy in a bowtie venturing courageously to the very heart of some of the world’s biggest threats.

“ ‘The End Is Nye’ sends Bill Nye into the most epic global disasters imaginable -- both natural and unnatural,” says a Peacock press release.

Peacock describes Nye as “hell-bent” in his exploration of the apocalypse to come. “Each episode takes a hell-bent dive into the mystery and reality of [the] threats [imperiling mankind], from viruses to volcanoes, asteroids to authoritarianism, and climate change to chemical warfare,” says Peacock.

But don’t worry, Nye’s hell-bent dive into the world’s most catastrophic events and locales will not be all gloom and doom. “Every worldwide catastrophe is abundant with thrills,” Peacock says.

Then, just when you think there is no hope for the planet Earth, Bill Nye, the Science Guy with the grimmest eye, suddenly turns around and “demystifies [these threats] using science to show how we can survive, mitigate and even prevent them.”

Every worldwide catastrophe may be “abundant with thrills,” but they are also abundant with “hope and a way forward,” Peacock says, describing the show’s theme and message.

Can Bill Nye the Science Guy, save the world? Yes, says Peacock. In fact, says the show’s press materials, “ ‘The End Is Nye’ offers a scientific blueprint for surviving anything that comes our way.”