It's The Oxygen, Stupid

A properly functioning democracy depends on an informed electorate.

If you ask me, that's more true today than when Thomas Jefferson first said it, but the biggest difference between now and then is how reliant the electorate is on new media to keep them informed, and how bad a job the industry is actually doing.

That's what came to mind today while I was listening to Ipsos' Chris Jackson give his regular monthly update on political polling leading up to the midterm elections and the fact that even big legislative wins like the Inflation Reduction Act don't generate the level of coverage that might otherwise merit.

"[It is] a major piece of legislation. Interestingly enough, it has already fallen off the news cycle," Jackson said, noting that it initially generated a "good number of headlines yesterday, but today is almost nowhere to be seen. Meanwhile, Donald Trump... continues to dominate the media's attention."

And yes, while the twice-impeached former president's dominance of the news cycle may have much to do with his criminal activities, it nonetheless means he's in the gaslight -- er, I mean limelight -- which means it is sucking all the air out of the news-media coverage that much of the electorate uses to stay informed.

"Fundamentally, this is sort of the problem with the contemporary American news industry," Jackson bemoaned, noting: "They will spend two weeks talking about the FBI going to Mar-a-Lago to seize some documents, even without any actual new information, and then spend a day talking about the largest piece of climate legislation in American history. Priorities, right?"

Jackson's polling data backs that up. He cited stats showing average Americans don't know much about the Inflation Reduction Act. The data shows that only around 40% of Americans are familiar with what is in the bill, and support for it falls along obligatory party lines. In other words, a 50/50 split.

However, when Ipsos surveyed Americans about specific pieces of the act -- allowing Medicare to negotiation prescription drug prices, lowering costs for renewable energy sources, extending health insurance subsidies for middle-income people, getting rid of capital-gains loopholes for the rich and increasing the corporate minimum tax rate to 15%, requiring energy companies to reduce methane emissions -- Americans of all affiliations overwhelmingly supported them.

Jackson said the phenomenon is not unique to the Inflation Reduction Act. He said it has been true of other major legislation in the past, "that even if the pieces of the legislation are really popular, the overall top-line opinion of the legislation tends to just break down along party lines."

It's the power of American political partisanship.

It's also the fact that most Americans do not understand or pay close enough attention to what the elements of the legislation are.

And one big reason is the amount of and quality of the news media coverage of it.

That said, Jackson noted that Ipsos' tracking for the midterms has swung more toward the Democratic party's favor than it had been just a few months ago, when Ipsos was handicapping a potential red wave in both the House and the Senate races.

It's polling was conducted in July, so it probably doesn't reflect any recent momentum from the Inflation Reduction Act, the Biden Administration's success in lowering gasoline prices, its killing of Al Qaeda leader Ayman al-Zawahiri, or other important milestones.

At this point, Ipsos still is handicapping it is likely that Republican's will gain control of the House, but that control of the Senate is now more of a toss-up.

Given that economic issues -- especially the rising inflation -- remain the No. 1 issue for voters, he said much will depend on how that continues to impact Americans over the next few months.

As for the 800-pound orangutan dominating the news cycle leading up to it, Jackson said that even if he should declare himself a candidate for the 2024 presidential race before the midterms, it's likely to have no significant bearing one way or the other.

"I don't know if Trump's announcement will necessarily move things," he said, adding, "I do think that where Trump's involvement can potentially be more impactful is in terms of what's happening in the news cycle."

Depending on the timing of his candidacy announcement, Jackson said it will "suck up all the oxygen."

And by oxygen, he means the focus of the news media industry's coverage.

Or you can take Red, White & Blog's lead, and whenever possible, just leave his name out of it. 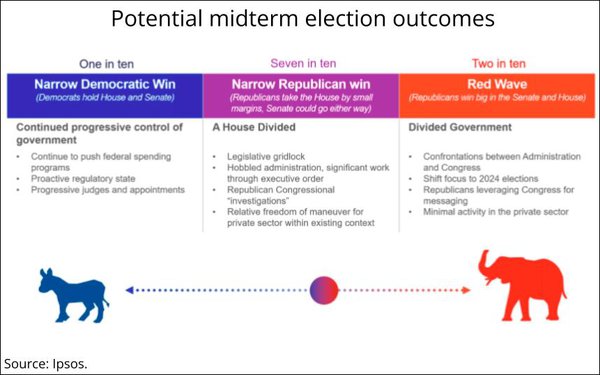