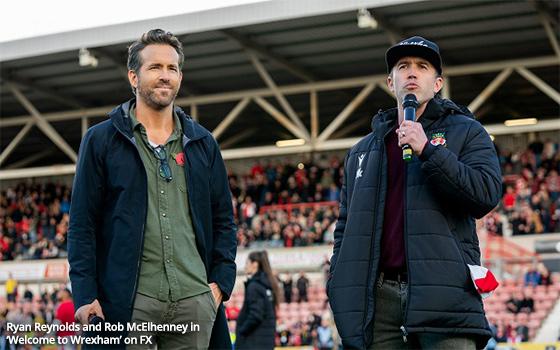 A new docuseries premiering this week in which a TV star and a movie star team up to buy a soccer team in Wales is the kind of show that makes you ask a simple question: Why?

Maybe it is because the two partners -- movie star Ryan Reynolds and TV star Rob McElhenney -- are already in business with units of Walt Disney Co. and the company said yes as a favor to them.

Their new show is called “Welcome to Wrexham.” It is a docuseries coming to FX on Wednesday about something that actually happened: In February 2021, the two closed on a deal to buy the Wrexham Association Football Club in Wrexham, Wales.

First formed in 1864, the Wrexham AFC is the third-oldest professional association football club in the world, according to Wikipedia.

Thus, the show is about how this purchase came about and what it has been like for the two partners from Hollywood.

Ryan Reynolds is a movie star who is perhaps best known for playing the title role in two “Deadpool” movies adapted from Marvel comic books.

The two movies are said to have grossed about $1.5 billion (a third one is in the works). Marvel is a unit of Disney. And so is 20th Century Fox, which produces the movies and distributes them.

McElhenny is the creator, executive producer and star of “It’s Always Sunny In Philadelphia,” which has been around since 2005. It is an FX show also seen on Hulu. FX and Hulu are owned by Disney.

By all appearances, the show’s longevity has made McElhenney wealthy. Among other things, it has put him in position to partner up with Reynolds in the purchase of this soccer team.

A TV columnist casually getting wind of this show without really paying close attention can be forgiven for believing it would be a scripted comedy.

As such, it would have risked being compared to the critically acclaimed “Ted Lasso,” which is also about an English soccer club.

Unlike “Ted Lasso,” which thrives on the quality of its scripts and performances (among other virtues), “Welcome to Wrexham” is a talky docuseries whose success would seem to depend in large measure on whether or not prospective FX viewers and Hulu subscribers (or anyone else) really care why and how these two celebrities bought this soccer team.

This would seem especially challenging when it comes to attracting an audience in the U.S., where the history, struggles and triumphs of an old Welsh football club are not exactly subjects you hear people talking about over here.

The TV Blog sincerely hopes that Reynolds and McElhenney have a blast as owners of a professional football team. But is hard to see how their story will resonate with the rest of us.

“Welcome to Wrexham” premieres Wednesday, August 24, at 10 p.m. Eastern on FX, and streaming the next day on Hulu.