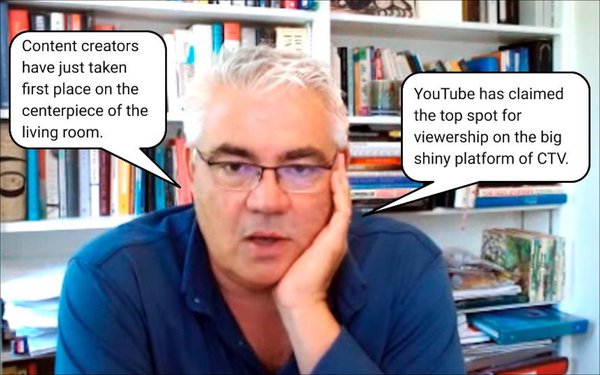 Real milestones – the kind that put a dent in the media universe – don’t come along that often, but when they do, they change the way we think about how people use media.

In the nearly half a century that I’ve been covering this industrial revolution we call “media,” some of its most significant inflection points were documented by – who else – Nielsen, which despite its flaws, reboots, and constant array of challengers, has more or less remained our common reference point for dimensionalizing the media universe. At least, so far.

So I was struck by last week’s announcement that Amazon Prime’s “Thursday Night Football” coverage will be the first live-streaming show rated by Nielsen, and the relative lack of fanfare surrounding it. It made some news, was one of the most-read stories on MediaPost for the week.

But to me, it was one of the most significant recent developments redefining what we have historically called "television," but which nowadays, we fumble around with a variety of modifiers -- nonlinear, over-the-top, and yes, even "connected TV" -- to redefine its expansion in new forms due to advances in new technologies enabling people to watch in new ways.

For at least half my time spent covering the medium, people have been flummoxing how to describe it and what to actually call it. So it seems fitting that yet another Nielsen ratings milestone reminds us it's really just TV.

The same thing was true when Ted Turner first started bouncing a local Atlanta station off a satellite, creating the first nationally distributed cable TV network, or when he launched the first 24-hour news network using the same technology. Or the litany of new "narrowcasted" networks that emerged as part of that "500 channel universe" expansion we eventually called "cable TV."

Of when savvy entrepreneurs like Henry Siegel (LBS), the King brothers (King World), Mike Kammerer (ITN), figured out how to turn locally distributed TV shows into the equivalent of national networks, all by the simple act of getting into Nielsen's "pocketpieces."

The truth is  that TV has been an ever-expanding universe in and of itself, ever since the Farnsworth invention, and every technological change that came after it.

Yes, many of these technologies have changed how -- and often when and where -- people watched TV, but they were all just part of its progression.

You've no doubt read columns like this before -- maybe even some written by me -- but we keep writing and rewriting them, because we're just trying to define something we think needs redefining, but it doesn't. Because it's been defined and redefined so many times already. And we still think of it as "TV."

I started writing this version of this column over the past several weeks when I heard a couple of people I respect and consider authorities on the subject grousing once again about what to call the expanded TV universe.

One of them was GroupM's Brian Wieser, who in a recent episode of his "This Week Next Week" podcast reminded us what all the new streaming variants actually are: "I will pound the table," he said, "and say, it's all one professional video universe."

Cass, whose company basically aggregates the best of online video's so-called "creator universe" -- what we once called "user-generated content" created by non-professional industry insiders, and sells it to national and international advertisers, says the new TV variant, has recently achieved a milestone of its own that bares some industry attention.

Sourcing some loosely cobbled together stats including a Forbes article and an eMarketer report, Cass made the case that both CTV, as well as the "creator universe" within it -- primarily big numbers shows distributed via YouTube -- has also reached an inflection point worthy of your attention, because it is now a significant share of what people actually watch on the connected TVs and devices inside their living rooms. You know, what we previously might have called "prime time," etc.

"And yet, it feels like a secret in plain sight that the top ranking creator networks are some 30% bigger in unique viewership than the next largest "old entertainment" player -- NBC, according to Comscore -- and YouTube dominates the landscape by some distance," Cass asserts.

When I asked him to back it up with some firmer numbers, Cass groused that there has been some latency in Comscore's ability to actually do that on a syndicated basis, but was able to get Comscore to generate a custom analysis of BBTV's reach (see below). 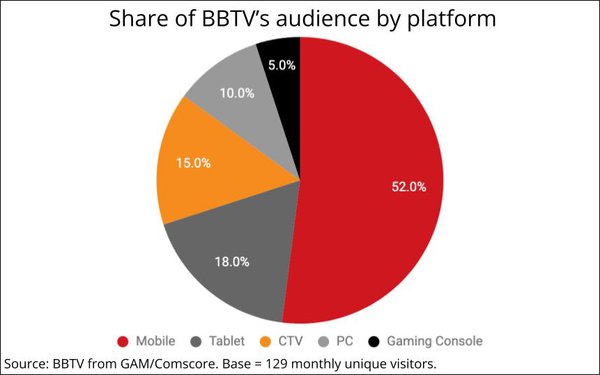 "This is total network and really doesn’t tell the whole story," Cass says, noting that if he were to analyze a segment such as "sports CTV," BBTV's reach on the platform would be more like 22%.

Exact numbers aside, his real point is that a big portion of BBTV -- or other aggregators and/or individual programmers -- distributing via YouTube, are now actually a sizable portion of the CTV universe watching on their living room sets or devices, and that big brands and agencies should start thinking that way.

So at that point, I turned to the best big agency bean counter advising the world's biggest brands on how to think about it.

"We’ve made a judgement call that YouTube does not go in the professional video line item in any country in our 'This Year, Next Year' data," says GroupM's Wieser. "While there clearly is some content that is professional or semi-pro, we don’t think it’s a majority of the content or revenue.

"There’s clearly a case to include YouTube in a TV line item for an individual marketer, but for purposes of this modeling we don’t think it’s there yet," he continues, explaining, "As it stands, if you include all of YouTube you might arguably include estimates of revenue associated with video assets that run on Facebook/Instagram.

"And then what do you do with a video ad that runs on a podcast consumed on a PC? Lots of big questions."