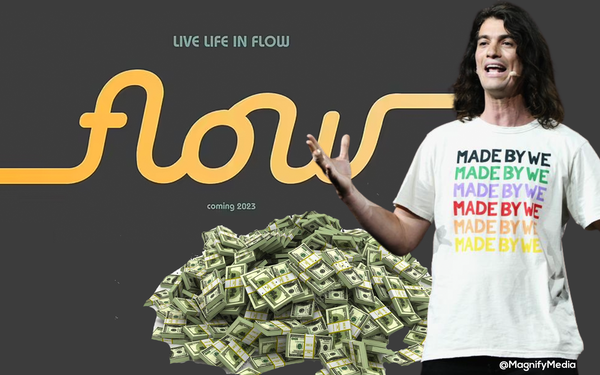 When deep-pocketed venture capitalists want to win a "space" there’s a tried and true method. They arrive with boatloads of cash and deploy a "growth at any cost" strategy.  Once they have forced out or acquired every competitor in the market, they consolidate power and raise prices. If you’ve taken an Uber lately, you know what I mean.

And that’s what WeWork was all about -- world domination. I have to confess I paid little attention to the saga. It wasn’t a tech company as far as was I concerned, and it wasn’t a media company, and back then that was what I was paying attention to.

So when I tuned in to the HBO series "We Crashed," I was curious. Here’s the thing, on one hand, I learned a lot about Neumann, his wife, their funders, and how the cash spigot shut off. On the other hand, I find myself wondering just how dangerous is it that the "information" I learned about WeWork came from a TV program that was clearly meant to be entertainment. Yes, it was "based on a true story," but it was also clearly not a documentary.  So where’s the line between fact and fiction? And is Adam Neumann’s backstory -- as he is about to launch his next deeply funded startup -- fact or fiction?

Well, it turns out that much of what the HBO drama presents as facts is actually true. Among them, that Adam Neumann (portrayed by actor Jared Leto) and business partner Miguel McKelvey (played by Kyle Marvin) founded a shared office space company called Green Desk in 2008.

Did Adam and his muse/wife Rebekah Neumann really ban meat-eating in the WeWork offices? Yes.

Was WeWork a cult? Kinda yes.

The only thing that is patently untrue is the "WeCrashed" character Cameron Lautner. Benchmark Capital partner Cameron Lautner, is an amalgamation of a number of partners who didn’t like the WeWork investment.

But the little things -- the nuance, and the feelings of the place -- are left to the creative work of the writers and directors. So we’ll never really know. One surprise in the series was that the money that was poured into WeWork and then lost, was attributed to SoftBank including funds from the Saudi sovereign wealth fund, who -- according to the HBO series -- had a bad meeting with Neumann and blocked further investment. True or not? That seems to be unclear, but believable.

So, with the HBO series in the rearview mirror, this week we learned that Neumann is back. He’s got a new company and a deep-pocketed backer.

Neumann’s new company is called Flow and he wants to transform the residential rental market.

Andreessen Horowitz, the prominent Silicon Valley venture capital firm, is the money behind the venture. It is investing $350 million in Flow, and values it at more than $1 billion dollars, even though it hasn’t launched yet.

Tipping its hat to the "story" of WeWork, the Horowitz fund A16z said: “Adam is a visionary leader who revolutionized the second largest asset class in the world — commercial real estate — by bringing community and brand to an industry in which neither existed before. Adam, and the story of WeWork, have been exhaustively chronicled, analyzed, and fictionalized – sometimes accurately.”

Certainly, I get it. Big funds need to make big bets to nail big returns.

So you kinda have to admire Neumann for still being hungry enough to do another startup, given that he exited with billions in cash. We’re told that he’s put a good chunk of his own money in Flow, even before the a16z investment.

So, that takes confidence, or hubris depending on how you look at it. And what does Horowitz say? “We are thrilled by the scope and aspiration of this project. It is not lacking in vision or ambition, but only projects with such lofty goals have a chance at changing the world.”

At the very least, there’s another HBO Series in whatever happens next.