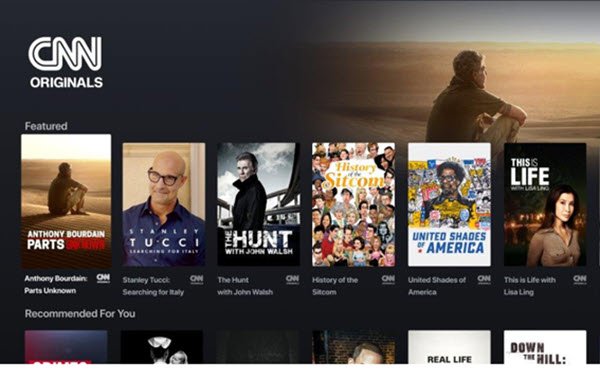 Five months after killing the more news-oriented CNN+ app a month into its launch, new CNN owner Warner Bros. Discovery (WBD) has added a CNN Originals hub to its Discovery+ streamer in the U.S.

It will add more than 800 episodes of nonfiction series from CNN Original Series, CNN Films and HLN Original Series — including such shows as “Anthony Bourdain: Parts Unknown,” “Stanley Tucci: Searching for Italy,” “Real Life Nightmare,” “Death Row Stories” and “Race for the Vaccine” to the content available to Discovery+ subscribers.

Subscribers can access the hub within the Discovery+ app or on the web.

The CNN+ app, containing only CNN-branded news and other programming, cost $5.99 per month. Now, Discovery+ subscribers will get much of the non-live/non-news CNN programming, along with the mostly unscripted programming from Discovery, Food Network, HGTV and TLC, for the current $4.99-per-month price.

WBD, now preparing to merge Discovery+ and HBO Max next summer, will also add some CNN Original content to Max. For example, “Who’s Talking to Chris Wallace?” will debut on Max this fall.

The CNN hub’s launch comes as WBD appears to be preparing to remake the CNN network’s breaking news and news analysis identity under its new chief, Chris Licht.

During a CNN staff meeting on Friday that followed the news that CNN is cancelling its long-running Sunday media analysis show “Reliable Sources” and that its host, Brian Stelter, is leaving the network, Licht said that “there will be more changes, and you may not understand it or like it all.” He asked CNN staff to give management some time, “see how things develop and then give us feedback.”

Licht said CNN will continue to cover TV and other media stories “when warranted,” and that the “Reliable Sources” newsletter will relaunch and expand its coverage with reporter Oliver Darcy at the helm.

Licht has expressed his intention to reduce what he refers to as “partisan” news coverage. So far, he has taken steps like stopping on-air use of the term “The Big Lie” to describe former President Trump’s big lie that he won the 2020 election, and decreased use of “Breaking News” chyrons.

Some staff reportedly suspect that the changes, including Stelter’s exit, at least in part reflect the influence of John Malone, the right-leaning owner of Liberty Media who is also a WBD shareholder.

A source familiar with CNN developments told The Daily Beast last week that “Everything about this rollout points to John Malone and [Discovery CEO] David Zaslav,” and “Chris Licht did not want to do this.”

In an email to The New York Times late last week, Malone denied having anything to do with Seltzer’s departure, and said he is not “directly involved” with any changes at CNN, although he did confirm that he would like to see the network take a more “centrist” approach.

After longtime CNN chief Jeff Zucker left earlier this year, ostensibly due to reasons relating to his delayed disclosure of a relationship with an executive who reported to him, Stelter wrote in his newsletter: “The people who say the Zucker-era CNN was lacking in real journalism clearly were not watching CNN directly. My best guess is that they were watching talking heads and reading columnists complain about CNN. And yes, I’m including John Malone in this.”

Stelter thanked Licht for letting him do a final, "goodbye" show this past Sunday, with guests including Carl Bernstein.

During the show, he told viewers that its in part on them to ensure that CNN and other media deliver. "So much of the media ecosystem in 2022 is garbage, but so much of it is spectacular,” he said. "We need to have room for media criticism and debate and discussion."