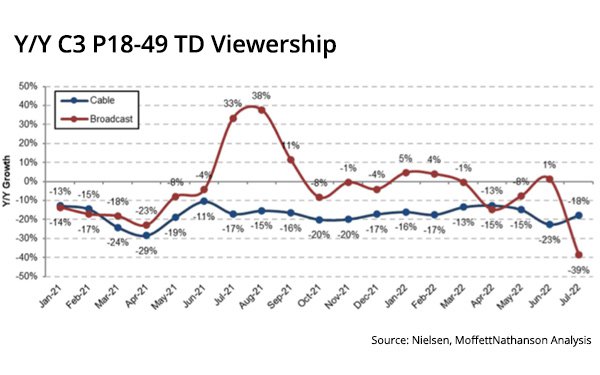 While streaming and cord-cutting continue to sink all legacy TV, cable TV networks in particular have been taking the brunt of that activity -- down 19% in total day 18-49 July viewership versus a year ago, according to media research company MoffettNathanson Research.

Broadcast has not been spared either -- it was down 39% this past July, due to comparisons to July 2021, which included one week of the Tokyo Summer Olympics and late post-season NBA and NHL games.

Looking over a two-year period, broadcast is down 18% in July.

“More troubling to us is the fact that broadcast's loss of key events wasn't cable network’s gain, as viewers did not return to cable,” writes Michael Nathanson, senior research analyst of MoffettNathanson Research.

This follows the recent news from Nielsen's The Gauge report for July -- which shows streaming platforms now leading for the first time -- cable TV in terms of share of total day persons two plus viewing with a 34.8% share to cable’s 34.4%. Broadcast was at 21.6%.

Looking at this dramatic result, Nathanson notes: “The Rubicon has been crossed.”

He adds: “These significant linear cable network ratings challenges should put further pressure on the ad dollars each media company relies on. Add in a potentially deteriorating macro environment and it becomes hard to find cause for optimism for many legacy cable network owners.”