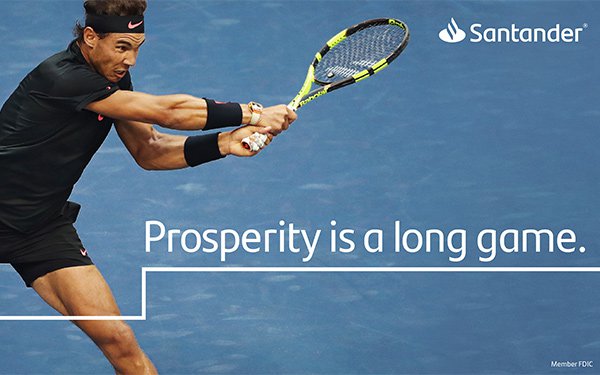 Santander Bank is the official sponsor of tennis star Rafeal Nadal. And it’s using that partnership to leverage a new tennis-inspired campaign that kicks off Aug.29, the day the US Open begins.

The creative, from The Martin Agency, links Nadal’s determination to the bank’s commitment to helping people and businesses prosper. The 60-second spot is titled “What Would Rafa Do?”

The spot is available here.

The language employed — prosperity as a “long game” and asking customers to “bank on the right partner” — aligns the two.

The spot airs in the Boston, New York and Philadelphia markets in broadcast, streaming, social and other paid channels. Santander is headquartered in Boston and its business targets the Northeast, where its 2 million customers live. US Open fans in New York will see out-of-home ads at Grand Central Station, LIRR/Willets Point subway stations in Flushing, Queens, where the championship is played, and the No. 7 subway line from Manhattan to Flushing.

Maha Madain, Chief Marketing Officer of Santander Bank, N.A., said: “Our focus is on helping people and businesses achieve prosperity, which — financially speaking — is the ultimate test of perseverance, the ultimate ‘long game.’ We want our customers to know they can ‘bank’ on us to help get them there.”

The ad is the centerpiece of a broader campaign.

The Martin Agency, part of the Interpublic Group, has also done work for Chobani, Old Navy, Axe, Oreo and CarMax.