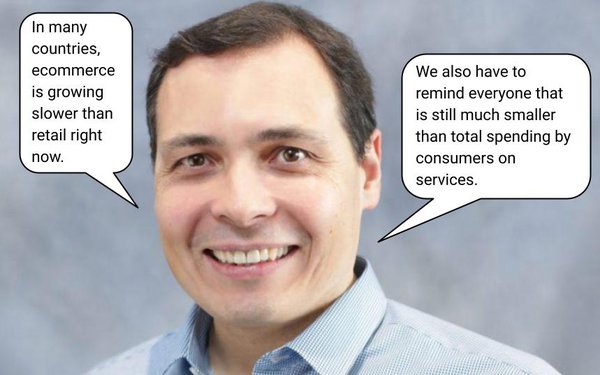 As they prepare to release a big ecommerce report, GroupM’s business intelligence team late last week spent some time discussing the meaning of mixed results for second quarter and July data reported by various countries and big retail companies, as well as its implications for advertising and media spending.

“[It] has an impact on media and advertising, because there is a very direct relationship between spending on advertising from many of these companies – especially on digital platforms – and [it’s] coming down,” GroupM Global President of Business Intelligence Brian Wieser said during the team’s weekly “This Week Next Week” podcast.

He and colleague Kate Scott-Dawkins spent a fair amount of time during the episode discussing the varying definitions of ecommerce and retail sales by different nations and companies, but the overall theme was that the second quarter and July 2022 have suffered by tough comparisons to the same periods last year, in which ecommerce sales surged following the COVID-19 pandemic, as well as the acceleration of various marketers’ “digital transformation” initiatives.

“In many countries, ecommerce is growing slower than retail right now,” Wieser summed up, as he and Scott-Dawkins described how the penetration level of ecommerce varies so much among nations based on how they define and account for it.

The same thing for big retailers, several of which – Walmart, Target, Home Depot and Lowe's – reported second quarter ecommerce sales that, so far, appear to be holding up in the high single-digit or low double-digit growth range.

Among other things, they described the “blurry” nature of consumer behavior in retail purchases, including occasions when consumers are in a store browsing simultaneously in-person as well as on their mobile devices, but then end up making a purchase on their phone and picking it up in person.

“Is that ecommece os is that retail,” Wieser asked, adding that the blurry nature of those consumer shopping behaviors means, “Omnichannel strategies are going to be dominant in finding different ways to connect with people.”

Lastly, as important as GroupM’s break down of retail and ecommerce sales may be, Wieser reminded his audience that they still represent only a fraction of total consumer purchasing – and presumably brand marketing – behavior.

“Many people look at retail sales data as some sort of proxy for what a consumer is doing or is not doing,” Wieser said, adding, “We also have to remind everyone that activity is still much smaller than total spending by consumers on services.”