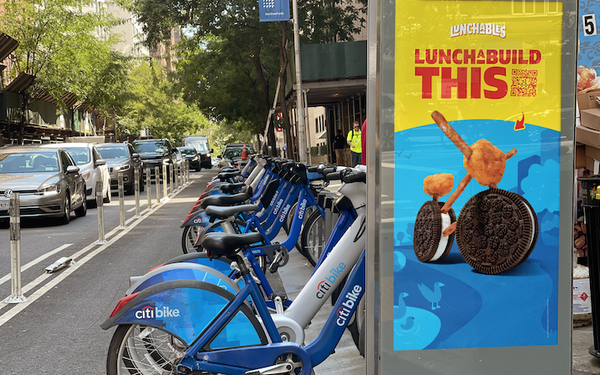 Lunchables still wants kids to play with food and snacks before eating them.

Last year, the Kraft Heinz brand turned snacks into toys with a campaign called “Built To Be Eaten,” spreading the word that kids feel their best when they are being creative.

That message was communicated via spots showing a child astronaut preparing to board a rocket that turns out to have been constructed out of cheese, crackers and pretzels—so she eats it.

In “Pretzel Horse,” two boys garbed in ancient clothes gaze at a gigantic Trojan Horse before discovering that it’s also made of pretzels—so they eat it.

This week, Lunchables took things up a notch by morphing the “Built To Be Eaten” concept into “Lunchabuild This” to spread the word about how Lunchables can be transformed into everything from animals to vehicles.

Scanning a QR code on the OOH placements connects people with the Lunchables website, where they can order food and snacks and access 25 “blueprints” for transforming the edibles into artistic creations.

“Lunchables is committed to fueling kids’ creativity and inspiring them to explore the limits of their imaginations,” Samantha Mills, Kraft Heinz associate director of brand communications, said in announcing the campaign.

For the chance to win $2,000, people can post their Lunchabuild creation on Instagram, explain what inspired the build and how they would spend the money for “an experience of a lifetime.”