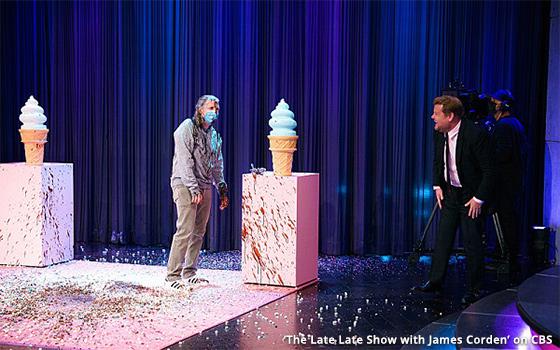 A messy comedy bit in which James Corden flung spoonfuls of ice cream around the studio of the “Late Late Show” demonstrates once again that late-night TV has evolved into an arena where child’s play prevails.

The segment seen this past Monday on the CBS late-night show started with the show’s crew presenting Corden with a new desk containing three tubs of ice cream under its desktop -- vanilla, chocolate and strawberry.

Corden then flung spoonfuls of the ice cream to staff and audience members who were expected to catch the soaring scoops in small bowls.

Another portion of the bit had some staff members and at least one CBS exec having sundae toppings dumped on them from above such as sprinkles, hot fudge and other gooey substances.

In the picture above, the “human sundae” was Nick Bernstein, senior vice president of late-night programming, West Coast, for CBS, who appears frequently on the show.

This spectacle of people being doused by a viscous substance unleashed from above is reminiscent of the green slime that became a trademark of the old “Double Dare” on Nickelodeon -- a kids’ show and kids’ network, respectively. CBS and Nickelodeon are both owned by Paramount Global, formerly Viacom.

The target audience for a show such as “Late Late Show” is on the young side, but presumably they are young adults.

It is doubtful that any children are staying up late enough to watch 44-year-old James Corden throw his food around, although it is reasonable to assume they would find this hilarious.

As many parents know, irritable babies are often given to splattering their surroundings with food such as Gerber’s, for example.

The TV Blog concedes that Corden’s ice cream flinging was not quite on par with a baby’s tantrum.

Besides, a late-night host positioning Gerber’s baby food front and center in a comedy bit would be highly unlikely, right?

Wrong. In 2019, Conan O’Brien, then 56, took part in a Gerber’s taste test with members of his staff during one of his podcasts.

That occasion resulted in a TV Blog not unlike this one that complained about the immaturity and childlike hijinks that have hijacked late-night.

That blog focused mainly on “The Tonight Show Starring Jimmy Fallon,” which often features bits in which Fallon, 47, and his guests participate in games that some people might consider childish.

A blog earlier this month characterized the show as the epitome of a new “Age of Immaturity” that has overtaken television.

But as one colleague pointed out yesterday, David Letterman pioneered the same kind of child’s play I’m complaining about as far back as the beginning of NBC’s “Late Night” in 1982 -- 40 years ago.

Critics complained about that too. But as usual, TV had the last laugh.