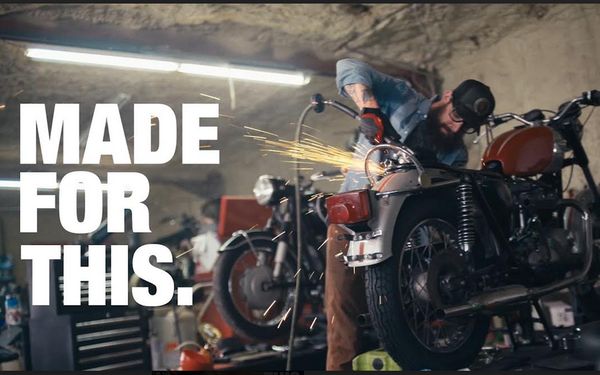 Northern Tool + Equipment is launching its first national campaign that positions the retailer as the go-to choice for skilled DIY consumers and professionals.

The campaign “Made For This,” created by Colle McVoy, has various national broadcast spots targeted to “skilled solvers,” regardless of age, gender or background. From building a custom-bike to transforming a backyard, Northern Tool ads suggest “solving your project today.”

A 30-second broadcast TV spot “Made For This” and two 15-second spots, “The Fun Part”and “Making Things You Can’t Buy” debuted during the NASCAR Go Bowling at the Glen race on August 21 and will air during NASCAR races this fall.

The campaign also taps into influencers, such as Rae Ripple @raeripple – a noted metal artist — who sculpted a giant steel armadillo to demonstrate how Northern Tool is the place to buy things that cannot be bought.

According to Mintel data, a large majority of homeowners claim DIY status. Northern Tool + Equipment identified an attitudinal segment of both the DIY and B2B shopper. Their proprietary audience represents more than 35 million people who spend $31 billion in the category each year.

“We see powerful business potential in connecting with the mindset of our audience," Todd Allard, SVP marketing, Northern Tool + Equipment, told Agency Daily. “The fact they love the process of solving problems and creating amazing things with our tools, reinforces our ‘Made for This’ vision.”