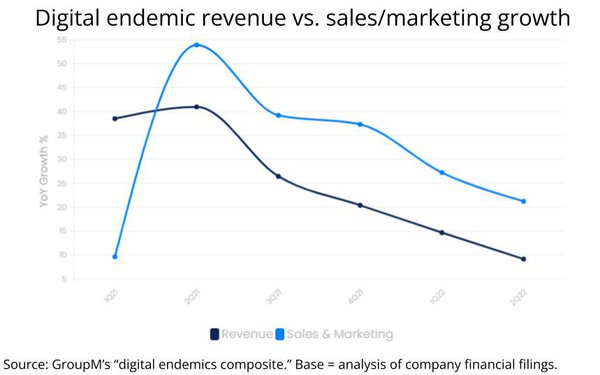 Advertising and marketing spending by so-called "digital endemics" -- a category of high-intensity advertisers that have been fueling much of the overall advertising industry's growth -- has begun to slow down, according to an analysis released this morning by GroupM's Business Intelligence team.

"When you look at the digital endemics, there really is an appreciable slowdown," GroupM's Kate Scott-Dawkins said during an episode of the weekly "This Week Next Week" podcast she co-hosts with Global President of Business Intelligence Brian Wieser that dropped this morning.

She said that the category -- a GroupM composite of about 40 pure-play digital companies ranging from biggies like Amazon, Facebook and Google to somewhat smaller ones -- saw their aggregate sales and marketing expenses decelerate rom "high double digits" over the last six quarters to "just below 10% even for the [second quarter]."

While that might still sound like healthy marketing growth compared with most categories, GroupM defines it as a "high intensity" ad category that had been spending as much as 30% of its revenue on marketing, and consequently had been contributing to overall advertising-industry growth.

“The typical business spent 1% of revenue on advertising," Wieser added during the episode, noting: "Packaged goods companies, which are known to be really intense advertisers, are maybe more like 5% of their revenue going to advertising. So these are really, really high levels."

As important as the composite is as a potential leading indicator for overall ad growth, Wieser noted that GroupM still doesn't have visibility on current ad-spending levels by a correspondingly significant category of longer-tail digital endemic advertisers: "the thousands and maybe hundreds of thousands" of smaller, independent app developers whose business models are often dependent on them advertising aggressively to install new users.

The GroupM executives ruminated on the reasons for the digital endemics slowdown -- whether it was being driven by "fiscal conservatism" or corresponding deceleration of revenues -- but said it would take another few quarters before the trend line is fully known.

On the bright side, the GroupM team said some "sub-composite" digital endemic categories -- especially travel and rapid food-delivery services -- continues to be expanding marketing at intense levels.

The travel sub-composite -- comprised of Airbnb, Booking.com, Expedia and Tripadvisor -- grew its marketing expenditures 59% in the last quarter.