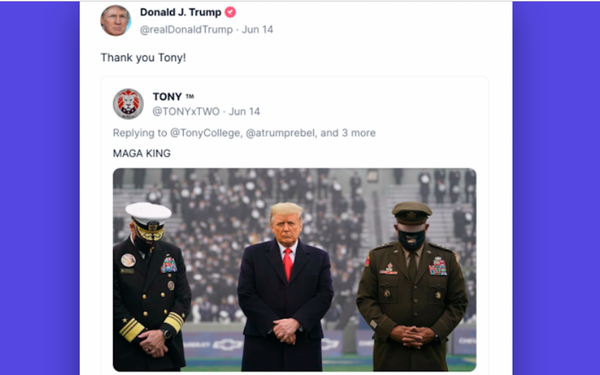 The analysis finds Truth Social has verified 47 QAnon-promoting accounts out of a total 88 (verified and unverified) users with more than 10,000 followers that have been promoting QAnon conspiracies on the platform.

The report found that 32 of those accounts were previously banned by Twitter.

NewsGuard also found that some of Truth Social's top executives -- including the former president's personal account consisting of 3.8 million followers, as well as Truth Social CEO Devin Nunes -- have continually amplified many of the QAnon posts by "retruthing" them to their followers.

"QAnon supporters contend that Trump and an anonymous government operative who goes by the name 'Q' are engaged in a struggle to take down a 'deep state' network of child sex traffickers," the NewsGuard report reads, noting, "QAnon has been linked to numerous violent incidents, including the Jan. 6, 2021, attack on the U.S. Capitol; an armed standoff at the Hoover Dam in 2018; and the 2021 killing of two infant children by their father, who allegedly told prosecutors that he had been “enlightened by QAnon and Illuminati conspiracy theories.”

The analysis follows reports of an overall uptick in violent rhetoric on Truth Social in the wake of the FBI's August 8 search of the former president's Mar-a-Lago resort.