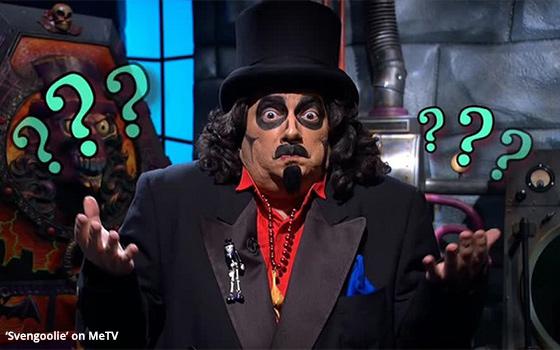 A campy, home-grown showcase for old monster and sci-fi movies on a broadcast diginet has built an audience of nearly 1 million every Saturday night.

The show, “Svengoolie,” is not seen on a major network, yet its audience at 8 p.m. to 10 p.m. (eastern) Saturdays is bigger than some name-brand cable networks in the time period such as TNT, CNN and Paramount Network, The Wall Street Journal reported on Thursday.

The show originates from the studios of Weigel Broadcasting in Chicago. It airs on Weigel’s MeTV -- Memorable Entertainment Television -- one of about a half-dozen diginets that present lineups of old TV shows, sometimes very old.

While “Svengoolie” is not an old, scripted TV show in the same vein, the character has been around since the 1970s, and has been a staple of local Chicago TV for decades.

Like the other diginets, MeTV is available on cable systems around the country. It is carried on digital subchannels of TV stations almost everywhere. MeTV covers an estimated 92% of the U.S. and is said to be the largest diginet by percentage of population reached.

Comedian Rich Koz, seen in the photo above in Svengoolie makeup and costume, has been playing the role since 1979. Now 70, he is only the second actor to don the character’s trademark top hat and raccoon eye makeup.

“It took me 40 years to become an overnight sensation,” Koz told the Journal in the same manner in which he tosses off corny one-liners on the show during breaks in the B-movies the show specializes in.

His off-the-cuff humor, often followed by a rubber chicken thrown at him from off-camera, has endeared him to a growing national fan base. The WSJ said the show’s audience has doubled since 2018.

This achievement apparently struck the editors of The Wall Street Journal as so stupendous that they played their Svengoolie story on Page One.

How popular is “Svengoolie?” The “Svengoolie” page on the MeTV Store website offers merchandise ranging from t-shirts to cellphone covers.

The items are apparently popular. A section of Svengoolie.com devoted to fan photos goes on for 289 web pages, each containing 20 or more photos, in which most of the fans are wearing Svengoolie t-shirts, caps and hoodies.

Thus, in a TV universe in which the biggest media companies on the planet are involved in a relentless, noisy, billion-dollar promotion and content battle with each other, a home-grown show with a corny, congenial host showing campy old movies is quietly drawing almost a million viewers a week.

It is a reminder that in the final analysis, sometimes content is king, regardless of platform.