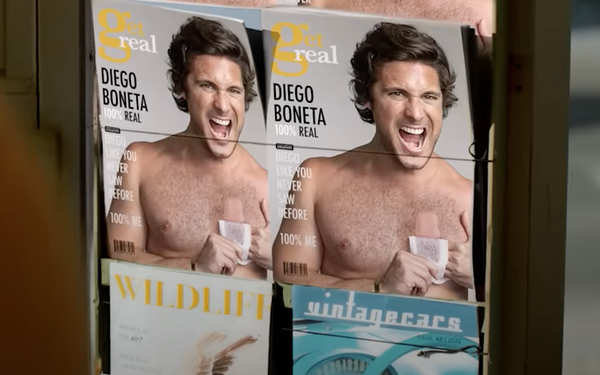 The California Milk Processor Board wants people to imagine a world in which things are just as “real” as milk.

The latest campaign from the organization best known for the "Got Milk?" slogan features Mexican-born actor and singer Diego Boneta, and is running only in California—with 40% of the media spend targeting Hispanic communities.

This “Get Real” spot from Gallegos United opens with a guitar-playing singer crooning “If the world was a real as real milk” as Boneta strolls by.

There follows a series of examples of what honesty could like: From a man holding a sign that reads “This loan is a bad idea” to a panel in an airport that directs travelers to “Overpriced taxis for tourists.”

Central to the creative concept is the iconic "Got Milk?" slogan and its status as a pop culture icon, according to John Gallegos, founder and CEO of Gallegos United parent United Collective.

“In this case, we’re coming off the cancel culture and people wanting authenticity and to be their real self and show up. So there’s this awesome synergy between milk as a real beverage and people wanting real in their life. It’s a fun place to play.”

In one verse of his song, the musician sings “Yes you can admit you’re the only Mexican who can’t do spicy food," as a man is seen chugging from a gallon of milk.

It’s a reflection that Hispanics represent of 40% of California’s population, according to Gallegos.

“If you do [marketing] in California that is not culturally fluid, you’re going to be missing a significant percentages of the population.”

He adds that consumption of dairy milk—which has dropped steadily across the country for decades—its declining at a slower rate in California.

“We’re trying to stem the decline.”

Only at the very end of the spot do the words “Got Milk?” appear.