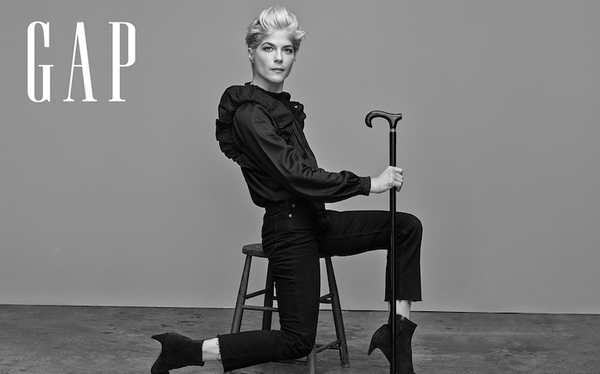 Gap is welcoming fall with a new campaign and old-school inspirations, with actress Selma Blair and musician Labrinth bringing some of the brand's most memorable ‘90s looks to life.

Sales have been falling at the Gap, and Mary Alderete, global head of marketing, says the new effort hooks into people’s shifting perceptions.

“This campaign was developed to drive sales through the lens of how consumer behavior is shifting,” she says.

Shoppers have responded in different ways through the pandemic, “with economic fears waxing and waning. So our campaign is based on these icons, these product heroes.”

Because the clothes represent a familiar style and value, “it made sense to have people wear them who are icons themselves,” she tells Marketing Daily.

She thinks Blair is a perfect fit for the campaign and the collection. “She is the epitome of a strong, powerful woman.”

Blair, an actress and health advocate for others with multiple sclerosis, and U.K.-based Labrinth appear in both video and print versions of the new campaign.

Alderete believes America’s ongoing crush on the ‘90s has to do with Gen-Xers now introducing that style to kids.  “It’s an era with a spirit of optimism, innovation, and experimentation.”

She says it’s also been nice to finally say goodbye to the skinny jeans, “which have had a stranglehold on the industry for years. It’s so nice to see the loose jean back.” Gap is also reviving its 1970s flare, “which is also a relevant silhouette right now.”

The new ads are running on digital media, out-of-home and Gap brand channels.

The push also includes a project called Gap Logo Remix, inviting artists to design a unique GAP logo. Some of these designs will be chosen for a Gap NFT and physical hoodies.

This is an undeniably tough time for the San Francisco-based retailer. With revenue falling, CEO Sonia Syngal left in July, with Bob Martin, executive chairman of the board, filling in on an interim basis.