Rick and Morty Get 'Tricked' Into Promoting Wendy's 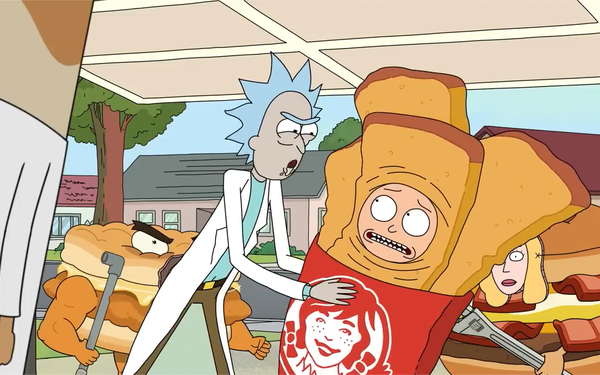 Rick and Morty’s sixth season just debuted, and that means some brand tie-ins. In the past, the cartoon property has promoted Carl’s Jr., Hardee’s, Old Spice, PlayStation and Pringle’s, among others.

Rick and Morty has partnered with Wendy’s in the past, and is at it again.

In the ad, Morty comes back home and is surprised to find Rick has turned himself into a Wendy’s Frosty-ccino and realizes that the same thing has happened to his family. In short order, Morty is turned into a package of French Toast Sticks.

At that point, a can of soda holds up a sign saying “Choose Wisely” and another sign promotes Wendy’s French Toast sticks.
At that point, Rick appears (Morty was mistaken about Rick being turned into a Frosty-ccino) and tells him that he’s been tricked into doing a commercial.

Of course, Rick and Morty have promoted Wendy’s without really meaning to. Or did they?