Brand Extensions Are All The Rage In Fall Network Lineups 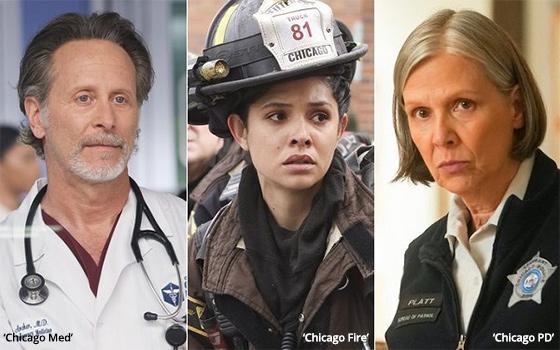 Legacy networks are relying more and more on brand extensions of shows whose brand names are already familiar to their audiences.

The brand-extension trend has been around for years. But this fall, the number of new examples are piling up even more.

Out of the 95 hours of network prime time this fall -- ABC, CBS and NBC with 22 hours each, Fox with 15 and the CW with 14 -- the TV Blog estimates that 20 of those hours will be devoted to brand-name shows and their spinoffs.

Those 20 hours will be distributed over four of the above networks, with Fox the lone exception this fall.

A look at the fall TV schedules shows at least four brand-extension triple threats -- two on NBC and two on CBS.

The two on NBC are the three “Chicago” dramas (pictured above) and three “Law & Orders.”

“Chicago Med,” “Chicago Fire” and “Chicago P.D.” (in order of time period) start their new seasons on Wednesday, September 21. They are starting their eighth, 11th and 10th seasons, respectively.

The “FBI” shows all have their season premieres on Tuesday, September 20. In order of time period, they are “FBI” (starting its fifth season), “FBI: International” (second season) and “FBI: Most Wanted” (fourth season).

The “NCIS” shows are the only group of the brand-extension trios to be split up over two evenings. The third one, “NCIS: Los Angeles” starts its 14th season on Sunday, October 9, at 10 p.m. Eastern.

But those franchises are well-established. New to the brand-extension game this fall are “The Rookie” on ABC and “Walker” on CW. Both are extending their brands this season for the first time.

Like “The Rookie,” in which Fillion plays a middle-aged man who joined the LAPD as its youngest rookie, “The Rookie: Feds” has a middle-aged woman (played by Niecy Nash-Betts) joining the FBI as the oldest rookie at the FBI Academy.

The “FBI” character was introduced on “The Rookie” at the end of last season. Unlike the other franchises on NBC and CBS, the two “Rookie” shows will not be seen on the same night, at least not now.

On the CW, it took only two seasons for “Walker” to spawn “Walker: Independence.” “Walker” is a modern-day reboot of the old Chuck Norris series “Walker, Texas Ranger.” It starts its third season on Thursday, October 6, at 8 p.m. Eastern.

The new “Walker: Independence” is being paired with “Walker” this season. The new one premieres on the same evening at 9 p.m. Eastern.

The new show is a prequel to “Walker” set in the late 1800s. In this one, a pioneering woman from Boston named Abby Walker encounters tragedy on the way west and settles in a small town in Texas called Independence.

On ABC, two new prime-time quiz shows can be categorized with the other brand-extensions shows -- “Celebrity Jeopardy!” and “Celebrity Wheel of Fortune” -- both stemming from the famed, long-running syndicated shows.

Both shows are premiering as regularly scheduled series this fall for the first time. The hour-long “Celebrity Wheel of Fortune” premieres on Sunday, September 25, at 9 p.m. Eastern, preceded by the one-hour “Celebrity Jeopardy!” premiere.